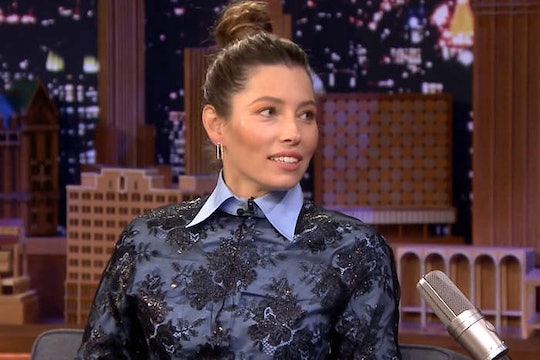 It's not Oct. 31 yet, but Halloween is canceled. Don't even bother dressing up in that meticulously coordinated family costume you've been planning for months. And that super-cool couple costume idea? It's complete garbage. Seriously, just stop. Because it's already been decided: Jessica Biel's Justin Timberlake costume officially wins Halloween.

But first, let's back it up a bit. You might have caught wind of a 1999 interview of Biel that resurfaced on The Tonight Show Starring Jimmy Fallon. During the Oct. 22 showing of the late-night show, Fallon played the throwback interview for Biel, according to Entertainment Tonight — and her embarrassed reaction was priceless, I might add. Because when asked about *NSYNC — who know, the wildly boy band her own husband was part of — Biel shared that she wasn't much of a fan.

"To be honest, I don't listen ... I haven't really ... I mean I know of them, of course," Biel says in the interview. "And I've heard of them, and I've heard of the music. I don't think I own any of their CDs. I'm not a huge fan. But I mean, cool, I guess." In Biels defense, this was record before she and Timberlake had ever met. (But still!) Judging by her reaction, Biel was clearly mortified about the shade she was throwing .

Keeping this hilarious revelation in mind, it's difficult to argue that Timberlake and Biel's Halloween costumes for this year aren't absolute perfection. Don't believe me? See for yourself!

Yes, that's Jessica Biel dressed as Justin Timberlake — and Justin Timberlake dressed as her microphone.That curly wig! That blue jumpsuit! (LMFAO, right?) To top it all off, it appears at least three other people are dressed as members of *NSYNC, as well. Apparently, Biel and Timberlake attended Casamigos Tequila Halloween Party in Beverly Hills on Friday night., E! News reported — which is where the photo was taken.

To be honest, though, Biel and Timberlake's costumes for Halloween 2018 were pretty amazing, too. The couple, along with their son, Silas, posed for a photo wearing classic superhero costumes — but with a Lego twist. Biel was Lego Harley Quinn, Timberlake was Lego Robin, and their then 3-year-old was Lego batman, according to PopSugar. "They got candy? LEGO!" Timberlake wrote on Instagram.

In 2017, the family of three dressed as characters from Toy Story, Mashable reported. "If you see us in these streets then have your candy ready! Trick-Or-Treat, little homies! — Woody, Jesse, and Buzz!" Timberlake captioned a photo of them from behind. And in 2016, Biel, Timberlake, and Silas all went as characters from the movie Trolls. (You know, the one in which Timberlake voiced Branch?) "Happy Halloween from Poppy, Branch and lil Branch. We be Trollin'..." Biel captioned her Instagram post.

Despite the fact that Biel wasn't a fan of *NSYNC back in the day, it seems like she's done a complete 360 since 1999. Or, you know, maybe she's just making it up to her husband for that shade-throwing interview that resurfaced. Either way, their couple costume is going to be impossible to beat this year. So let's not even waste our time, guys. Halloween is officially canceled.