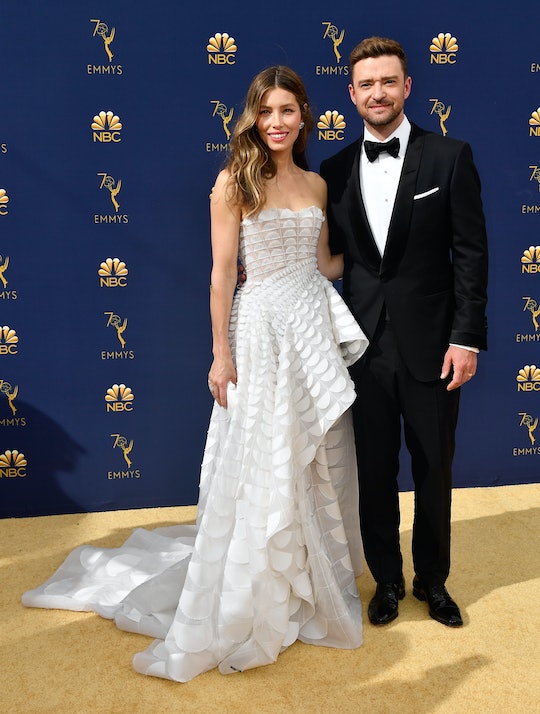 The Man of the Woods tour is officially over after more than a year of shows around the world. Fans are sad to see the tour come to an end, but there's one person who couldn't help but gush about it. Jessica Biel's message to husband Justin Timberlake at his last tour stop is the sweetest thing you'll read all day. The proud wife celebrated her husband's accomplishments on Instagram, as reported by People, proving yet again that these two are totally couple goals.

According to the outlet, Biel, 37, posted a video for Timberlake ahead for his final Man of the Woods tour performance on Saturday. In the video she gushed about how "proud" she was of her husband, adding that she has been in "awe" of him with each performance over the last year and a half. Biel, wearing a Man of the Woods tour had in the video, noted in the Instagram clip that she was trying to be quiet as Timberlake was "in the next room."

"Hey Tennessee kid, I'm being quiet because you're in the next room," Biel began. "It's your last show, it's the last Man of the Woods show tonight. I would say that I'm so proud of you but I feel like that's the understatement of the century and that somehow that I take ownership to what you've done this past year-and-a-half," she said in the video. "I'm just in absolute awe of you every night to see you up there in your glory doing what you've been put on this Earth to do."

Biel ended her message by noting that Timberlake is an inspiration to her and their son, Silas. She added in her Instagram video that he's been an inspiration to all who come in contact with him, adding that she was "so happy" he was getting some well-deserved time off.

"You inspire me, you inspire Silas. You inspire everyone around all. All of your fans, all of your friends and family. To work as hard and with so much passion as you do. You are truly a sight to behold," she said, clearly emotional, in the video. "I'm so happy that you're going to get some time off. I'm so happy for you and for us."

Timberlake's reaction to the sweet sentiment from his wife is so relatable. The pop star responded in the comments, "I mean... I'm not crying. You're CRYING! I can't with this message. I love you so much." Honestly, same.

The Man of the Woods tour kicked off on March 13, 2018 with a show in Toronto, Canada, according to TMZ. The outlet reported that he celebrated the occasion with shots for his crew and a few lucky fans near the stage. Per TMZ's reported, Timberlake toasted the audience, someone's impending baby and "motherf*cking Drake," who is from Toronto.

The tour went off without a hitch until November when, as Billboard reported, Timberlake began postponing shows due to bruised vocal cords. Shows in Los Angeles; Las Vegas; Fresno, California; Phoenix, Arizona; and more were affected, Billboard reported. Timberlake later added rescheduled dates to make up for those missed shows. Per Variety, New York was the first of those shows postponed due to medical issues. Timberlake addressed the issue on Instagram, apologizing to fans. The 2018 dates were replaced with new dates in 2019.

"My vocal cords are healing, but they are not all the way back to normal yet, so my doctors want me to continue to rest my voice," he wrote on Instagram. "They have asked me to hold off on singing until next month. I'm really sorry, I want to be back on the stage and I am doing all I can to get there quickly."

Despite the vocal issues, Timberlake's Man of the Woods tour was widely considered a success. Each show received rave reviews from attendees and journalists alike.

Timberlake clearly earned the adorable praise from his wife, and I can't wait to see how they — and Silas — spend their time off together.