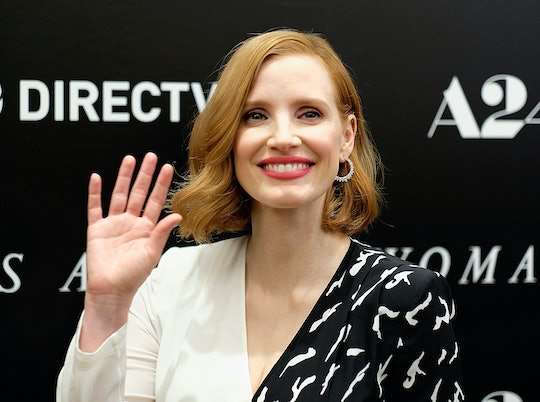 While Jessica Chastain is an absolute star in every single film she's in, the 41-year-old actress likes to keep her private life, well, private. In November, news broke that she had secretly welcomed a daughter, according to Us Weekly. And on Sunday, people were excited as Jessica Chastain revealed the first glimpse of her baby girl ahead of the 2019 Golden Globes.

The 76th Golden Globe Awards is an incredibly important event for Chastain. In 2013, she won an award in the Best Performance By An Actress In A Motion Picture - Drama category for her performance in Zero Dark Thirty. And last year, she was nominated again in the same category for her performance in Molly's Game. So it makes sense that Chastain would use this day to show off a very important part in her life — her daughter, whom she reportedly welcomed with her husband, Gian Luca Passi de Preposulo in 2018.

On Sunday night, Chastain took to Instagram to share a photo of her baby girl's hand, grabbing for a Piaget ring. "You've got good taste, kid," Chastain captioned the photo.

This picture might be the smallest glimpse of her daughter, but it's the introduction fans have been waiting for, even it's not a glimpse of her face. And unsurprisingly, Chastain's friends and followers were freaking out over this sweet shot.

"I might have cried a little bit when I saw that little hand," one person wrote.

"I'm too emotional for this, bye," another added.

"OH MY GOD," one perfectly stated.

Why are they freaking out? Because this is one of the first times that Chastain has even acknowledged that she welcomed a daughter into the world.

When the news broke in November, fans reacted to reports that Chastain and de Preposulo had secretly welcomed a daughter into the world in April through a surrogate, according to People. And their daughter reportedly has a gorgeous name — according to E! News, it's Giulietta Chastain Passi.

But it was only ever brought to people's attention that Chastain might have had a child after she was spotted pushing a stroller in October, according to Us Weekly. Since then, Chastain has never actually confirmed that she is a mom or commented on the birth of her daughter. So, for her to share this bit of her life on one of the biggest nights in entertainment is pretty huge.

Although she will probably continue to keep this side of her life private, it's already clear that Chastain is an amazing mother. She is such a fierce feminist who isn't afraid to speak up about equal pay, mental illness, and the importance of empowering women. So, it's just as likely that she will pass down these skills to her own child.

But, now that this side of her life is out in the open, fans can only hope that this won't be the last time they see her daughter.