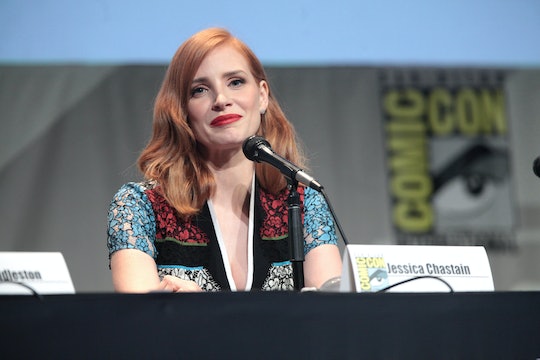 It's no secret that there's a gender imbalance in who runs Hollywood. That disparity is rarely captured as eloquently and hopefully as it was this week in The Hollywood Reporter in the form of Jessica Chastain's essay about getting more women in film and the good things that can happen when there are more women on movie sets. The inspiration for the piece was her experience working in Prague on the set of The Zookeeper's Wife. Not only was she working with a woman director (Niki Caro), but also with women producers, screenwriters, a novelist, a camera operator, a stunt coordinator, and more.

The crew wasn't entirely female — women still only made up about 20 percent of the cast and crew. But, even that number, according to Chastain, feels like a victory, and that shows just how unequal things in the film industry have gotten. She writes that "usually on a movie it would be me and maybe two or three other women, even though there are 100 people there. It's crazy."

She describes how the presence of women and having a woman director has a profound effect on the feel of the set and the filming process:

When you have both genders represented, then you have a healthier point of view. The energy is great, you all are working together as a community, and everyone is participating in the exchange of ideas. You don't feel a hierarchy; you don't have anyone feeling like they are being left out or bullied or humiliated. Sometimes being the only girl on a set, you can feel like a sexual object.

Not only that, but having women in charge means more women get hired for other positions, too, Chastain argues. Women in the industry know how hard it is to get a break and get ahead, so whenever they can, they help each other. Change happens when "women in the power positions [make] room for other women." The main thing, Chastain says, is that she wants "to make sure I'm contributing to cre­ating diversity in the industry. I want to work with anyone who is talented, but I know that some people have to work harder to succeed in this business than others."

Chastain's essay is a rare glimpse into what being a woman behind the scenes is really like, and while it may not be as glamorous as we imagine or as equitable as it should be, it sounds getting better, little by little.