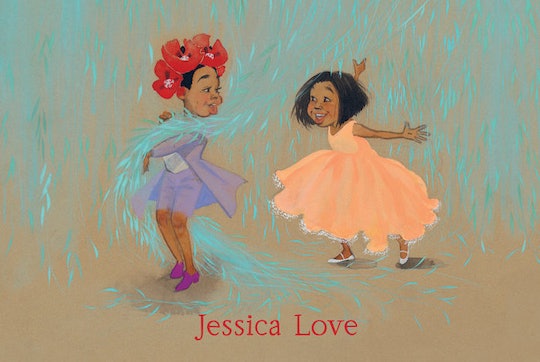 One of the quiet stars of children’s literature is Julián, star of 2019 New York Times Notable book Julian Is a Mermaid (Candlewick Press), by author/illustrator Jessica Love. On the way home from the pool with his abuela, Julián spies mermaids on the subway, their long hair and fishtailed skirts inspiring him to put his own mermaid outfit together at home — an outfit complete with headdress that feels like him, but also makes him wonder if it is OK for him to dress in such a way. The open-hearted original is getting a sequel, Julián At The Wedding, out this October, and Love gave Romper an exclusive sneak peek at the cover as well as a little bit of background on the story.

Love read Julián is a Mermaid at a recent very sparkly, sequinned, extra fundraiser for Drag Queen Story Hour. It culminated in what my daughter referred to as “a princess parade” where all the kids jumped in and marched through the church pews. The day was about community, self expression and finding joy, all the qualities that Love brings out through the characters and events in her books.

In Julián at the Wedding, Julián is decked out in a lavender suit and shoes, looking regal with his signature headpiece, in this case a crown of big bright red flowers. He’s made an enthusiastic new friend, Marisol, a flower girl in the wedding. The colors on the cover are fanciful and bold. Jessica’s process of storytelling starts with images rather than a linear plot and the image that came to her for this new book was kids hiding under a table at an adult party. The illustrations are similar to Mermaid except “maybe a little fancier,” Love says. The style grew out of “the magical, thrilling feeling of being a kid at a grownup party. “The under-the-table magic was the seed that sort of germinated the story.”

The main event is the ultimate party, a wedding. It takes place in a coveted patch of green space in Sunset Park, Brooklyn, where Jessica lives, and within a community that she describes as “a great combination of people flavors,” New York City being its own character in the story. Jessica describes city parks as “intertidal zones where everybody comes out and mixes together and these moments of magical world expanding encounters can happen.”

The special connection between Julian and Abuela anchors the new story, which builds on themes of community and intergenerational connection. Abuela “allows her grandson to take the lessons he learned in the first book and try them out with a new friend, Marisol.” One of Abuela's friends from the water aerobics class is also in this book, cast as Marisol's grandmother.

Jessica was close with her own grandmother and describes what she calls “a telescoping that can happen when there is a gap between generations, where sometimes you’re able to see each other a little more clearly.”

“I was intrigued by that ability across many, many years for people to see each other and recognize something essential in one another.”

Marisol is an exuberant kid with traces of her adventures in her chipped tooth and dirt-flecked clothes, and allows Love to explore ideas about gender expression further., “There is something indomitable about a pre-pubescent girl, and there is something tragic about the way traditional gender roles — which really begin to assert themselves around puberty —begin to undermine and curtail that confidence,” says Love.” I wanted to celebrate it in this story in all it's messiness and glory.”

Here, Love is interested in “what the traps are there and what it’s like when the walls of girliness are closing in around you and how we can make room for a bigger expression of girlhood. And how imagination is so crucial in little people’s ability to tell the world who they are and how they want to be.”