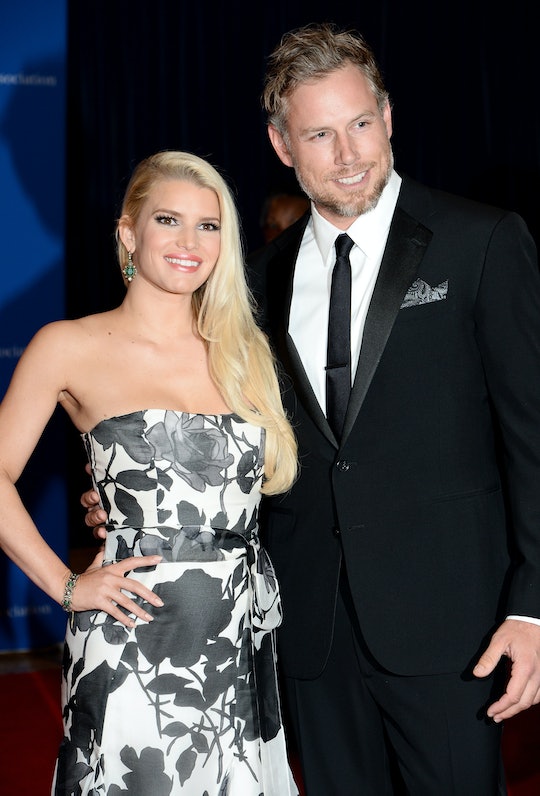 Jessica Simpson is officially a mom of three! After months of waiting and loads of relatable pregnancy updates later (who remembers the singer's swollen pregnancy feet saga?), Jessica Simpson finally gave birth to a baby girl, as People reported. And guys, she's adorable!

The 38-year-old fashionista's rep confirmed the news to People on Wednesday, and fans could not be more thrilled to hear of her baby girl's arrival. As Simpson shared on Instagram, her new daughter's name is Birdie Mae, she weighed in at 10 lbs., 13 oz., and was born on March 19.

Simpson and husband Eric Johnson — already parents to 6-year-old Maxwell and 5-year-old Ace —  officially announced their exciting pregnancy news on her Instagram account back in September 2018, according to Us Weekly.

Simpson's pregnancy reveal first showed a photo of Maxwell and Ace holding two huge black, polka-dotted balloons, captioned: "SURPRISE..." And the next photo revealed that there are smaller balloons inside the giant ones... pink balloons. "This little baby girl will make us a family of five," she captioned the sweet images. "We couldn’t be happier to announce this precious blessing of life.”

And now her family's precious blessing is finally here! Look at that sweet little hand!

The entrepreneur's exciting baby news came as a bit of a surprise to fans, as Simpson memorably told Ellen DeGeneres in 2017 that the baby factory was presumably out of business for the time being. “We got an IUD, nothing’s gonna get in that uterus," Simpson said in 2017, according to People. “I have two beautiful children, and I’m not having a third... They’re too cute … you can’t top that.”

Things can sure change in a year, though: Simpson has documented her joy at the upcoming arrival on Instagram, including bonding with her baby in New York City, hanging with her bump and Katy Perry and having a three-way baby shower with her fellow expectant friends.

The fashion mogul — who's been married to Johnson since 2014, according to E! News — previously revealed that her pregnancy with baby number three has been remarkably nausea-free, according to People.

However, that doesn't mean her pregnancy hasn't come without some uneasy side effects: ahem, painful swollen ankles and feet. In early January, Simpson took to Instagram to share a photo of her ailment with a plea to her had fans, writing: "Any remedies?! Help!!!!"

She did, thankfully, find a solution that seemed to work: Cupping, as she shared on Instagram a few weeks later.

Leading up to the birth of her baby girl, Simpson had shared a bunch of stunning photos from her baby shower. And, at the time, her fans were certain that she revealed her daughter's name — and they were right. "Birdie’s Nest," she captioned a photo from the special day.

Now that her baby girl has finally arrived, congratulations are definitely in order for Simpson and her beautiful family of five. As she did with her pregnancy, hopefully the mom of three will keep us updated on life her sweet, sweet newborn.