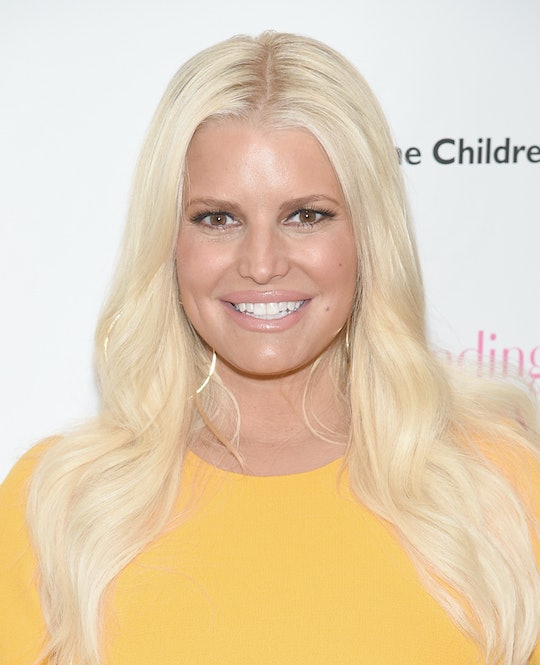 Jessica Simpson Is Getting Shamed For This Video Of Her Son In The Pool, & Ugh... Really?

Any mom who raises their kid in the public eye knows that dealing with online trolls is going to be part of the deal, and it often means that even the most innocent of comments can spark a debate. Case in point? Jessica Simpson is getting shamed for letting her son swim with a cast on, and honestly, the comments make me wonder why celeb mamas even bother to share about their kids online.

In a recent post, the singer shared an adorable video of her 4-year-old son, Ace, in the pool with his dad, Eric Johnson. In it, Johnson launched Ace into the air, letting him backflip in the water. The reality of course, is that snarky commenters likely would have found a way to criticize Simpson no matter what, but this time, the sticking point seems to be that Ace happens to be swimming with a cast on his arm.

If, like me, you also happen to have an adventurous and rambunctious kid, then all you probably see in the video is a little boy having a good time with his dad. But unfortunately, not everyone saw it that way. In the caption, Simpson wrote, "a broken bone doesn't hold this kiddo down," and well, that certainly seems accurate.

It didn't take long before the judgmental comments started rolling in: some took the opportunity to chastise Simpson for letting her son swim with a broken arm, according to Page Six — even though she's specifically noted that his cast was waterproof in a hashtag — with one user writing, "I had no idea it’s possible to swim with a broken arm! Probably not the best choice," and another chiming in with the much-snarkier, "This doesn’t seem very smart to me but then again I know the difference between chicken and tuna." And then, there were those who thought they'd just take a dig in general, like the commenter who wrote, "Dumb as hell. By the way, your face-work is obvious & sad."

Thankfully, there were also many people who made a point to chime in to let Simpson (and all other parents out there) know that Ace really just looked like he was having a great time, and that there's nothing wrong with letting him enjoy himself in the water, even with a broken arm. In fact, it's great to see that he's not stuck on the sidelines watching the other kids play, the way he would have been with a traditional cast (I mean, have you ever had to shower with a plastic bag wrapped around your cast? Because it is zero fun). And, hey, as one commenter wrote, "if you don't toss your kids in a pool then your kids are missing out."

The truth though is that, unless Ace's doctor told him otherwise, there's really no reason why he couldn't be swimming with his waterproof cast: according to Washington University Orthopedics, waterproof casts are designed to allow you to bathe, shower, or swim without having to worry about damage to the cast itself, and that, for the most part, it will dry completely on its own afterwards. Some precautions do have to be taken — you probably shouldn't stay in the pool all day long, and you have to rinse it with soap and water afterwards — but for the most part, it sounds like a pretty great option to help minimize some of the misery that can result in having a broken bone. Especially when you're 4 years old.

Simpson's video of Ace having fun doesn't necessarily mean that she didn't find it hard when her son first broke his arm though. While she may be totally supportive of her boy having a good time in the pool, in her first post about Ace's broken arm a week ago, she included the hashtag #ICriedMoreThanHeDid, according to People, which, honestly, probably sounds about right. It's not clear exactly how the break occurred, but let's face it, no parent ever likes seeing their kid hurt. And even though he seemed more than fine in his hospital room photo, it's always going to be majorly stressful when your child gets their first broken bone.

Of course, Ace is far from being the first kid to ever end up in a cast, and judging by Simpson's Instagram photos, it definitely seems like he's a bit of a natural risk-taker. While some 4-year-olds get freaked out by the notion of amusement park rides, Ace looked more than thrilled to have his hands up in the air in an Instagram photo Simpson shared of him on a ride with his sister, Maxwell Drew, earlier this month, and in a previous photo, Simpson shared a cute pic of her active son in inside-out pants and mismatched shoes, and wrote, "This kid wears his personality well- inside out with some shine and sport."

In other words? It doesn't sound like there's a lot that will slow Ace down, and it's probably for the best that Simpson and Johnson are willing to encourage him to be himself instead of constantly trying to get him to tone it down. Besides, Ace definitely doesn't appear to be suffering by having a broken arm, and it's likely that Simpson got the all-clear from his doctor before letting him get in the pool. So as much as safety is obviously important, it mostly just seems unfortunate that people are so eager to share judgmental comments about another woman's parenting skills — even if she is a celebrity. Unless Ace were actually in real danger, it seems like the least the rest of us could do is keep our opinions to ourselves.