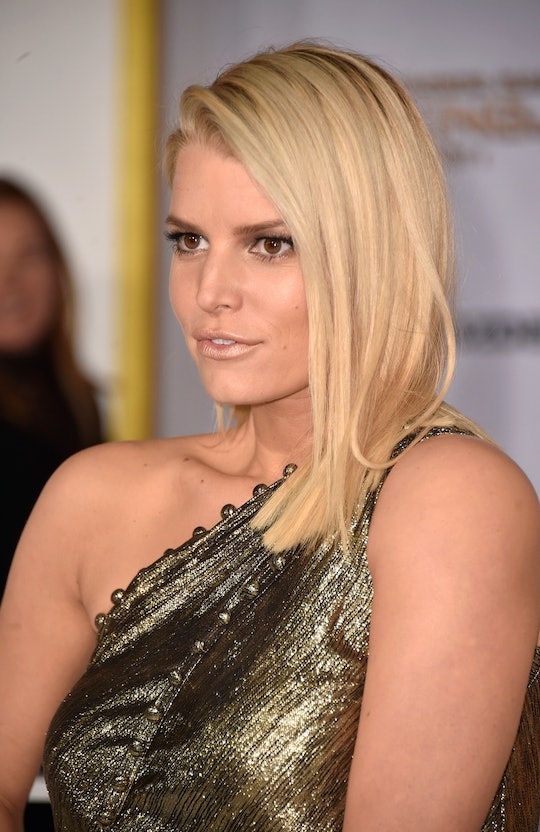 Jessica Simpson Is Getting Mom-Shamed For This Sexy Photo & Ugh, It's Such BS

Celebrity moms are, unfortunately, very familiar with the unique sting of mom-shaming. From their parenting styles, to their fashion choices, and everything in between, celebrity mamas just can't catch a break. Case in point, Jessica Simpson is getting shamed for this sexy photo and she's not the first to face public outrage over moms enjoying their bodies and their sexuality. Outdated ideas of traditional motherhood have made many people uncomfortable with a woman who both owns her sexuality and raises a child — and celebrity social media profiles hold the proof.

Simpson's Instagram post that caused her a fair share of flack shows her in a silky green robe, her signature big blonde hair, bright red lipstick, and a bit of peek-a-boo lingerie in a matching shade of crimson. She shared the image on Friday, Dec. 8, before a photoshoot promoting her fashion line. She gives a shout-out to her photographer and captions the photo, "Green with envy." But rather than turn green, many commenters went blue in the face chastising Simpson for the sultry shot.

One such user made it obvious that she doesn't believe a one can be both a good mother and a sexy, confident woman writing, "Is this how a mother of two children really wants to act? Get it together Jessica, those days should be behind you."

Another snarky commenter wrote, "Getting ready to go to a PTA meeting?" Just, ugh.

One seemingly sarcastic commented quipped, "Glad your husband allows you to show your tits all over the Internet. awesome!!!" And yet another wrote, "You are better than this. Cover up and be beautiful." Another took a rather harsh route and commented, "U look like a hooker."

A backhanded complimenter softened her criticism by saying, "You are beautiful but no need for the boobs to always be hanging out." While another simply commented, "Wow... 🙄"

There was a lot of negativity, but fortunately, not all of the comments were mean. One follower wrote, "Wow u are such a bombshell doll!" And another mom had her back saying, "Omgggg I wish my breasts looked like that after losing the baby weight after two kids! you look AMAZING!!!! Love you since forever girl!!!"

My favorite comment comes from the user who pointed out the reason behind the criticism and said, "So is she supposed to look like a nun because she's a mom?" YAS, girl!

There's another celeb mom who would most certainly empathize with Simpson's experience. Jenna Dewan Tatum has received more than her fair share of backlash for posting sexy photos after becoming a mother. After posting a few lingerie shots to Instagram, she was the victim of some of the most vicious mom-shaming that I have ever seen.

While Simpson has yet to respond to her critics, Dewan Tatum didn't take her shaming lying down. She shared another post of a quote that reads, "You can tell who the strong women are. They are the ones you see building up one another instead of tearing each other down." She captioned the post, "To all the strong women out there. May we be them, may we know them, may we raise them. Rise above judgment and step into love."

While not directly pointing out the pettiness of those shaming her, she made it clear who is taking the high road in this situation. And, no, she hasn't stopped flaunting it.

While not everyone who comments on these types of photos is there to criticize, there is definitely a reoccurring theme of shaming sexy moms. This particular form of the "Madonna-whore" complex leads people to believe that motherhood and sexiness can't coexist in one woman. Critics would have you believe that when you become a mother, you must leave all ideas of sexual confidence behind. You can't be both. Considering how hard it can be for mothers to feel good about their bodies again after having a baby, women like Simpson and Dewan Tatum feeling comfortable enough to post these types of photos is something to celebrate.

Aside from being seriously messed up, mom-shaming is actually counterintuitive. Studies have shown that it doesn't bring about the changes that the collective internet voice of nay-sayers demand. Instead, it fuels maternal anxiety and causes moms to constantly question their parenting choices, according to INSIDER. Sarah Clark, an associate research scientist in pediatrics at the University of Michigan, told Broadly that there are serious consequences to nitpicking parents online and in person:

A mom who's unsure of herself and feeling like she's getting a lot of criticism from all directions very likely is going to struggle to make a decision and struggle to be consistent with that decision ... which then leads to more criticism, which can get into a vicious cycle.

When you take into consideration the ineffectiveness and harm that mom-shaming does, it really doesn't seem to be worth the effort to type out that nasty Instagram comment in the first place. So, if you're thinking of going after a mom, celeb or otherwise, I urge you to put down your keyboard pitchforks and choose compassion instead.