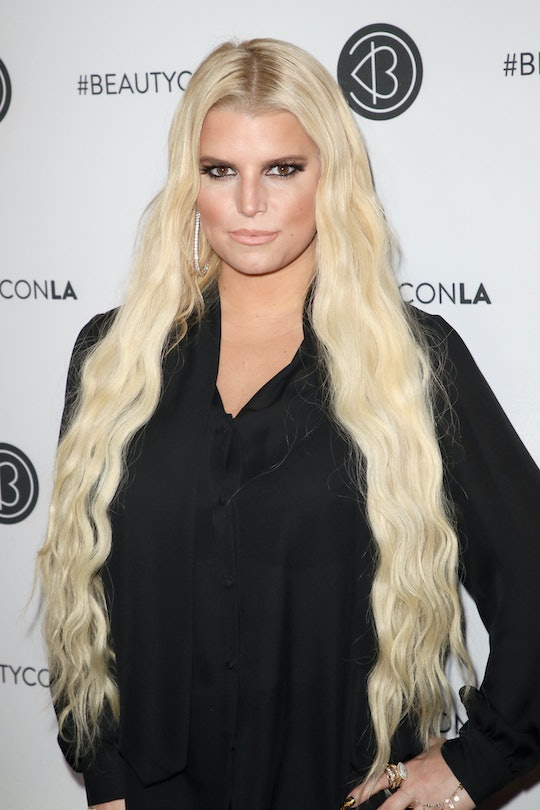 If you've got kids, chances are you've experienced mom-shaming at one time or another. Whether it be a not-so-innocent comment from a random stranger, or blatant criticism from friends, family members, or someone on social media, there seems to be no end to what people feel entitled to say. When you're a celebrity though, the judgment can be especially intense, and it's why Jessica Simpson's message for mom-shamers is so on-point: in a recent interview with Extra, the mom-of-two said that while people may feel like they have the right to criticize her posts on social media, the truth is that they don't see the whole story when they look at tweet or an Instagram photo or video. And honestly, it's a reminder that it's so unfair and unnecessary to judge mothers, especially when you don't have all the information.

Simpson was most recently the target of some major online shaming when she shared what was actually a really cute video of her son, Ace, goofing around in the pool with his dad, Eric Johnson. The problem? Ace was wearing a cast on his arm following a break he'd received not long before, and though Simpson specifically indicated that the cast was waterproof, commenters took her to task for letting her son go swimming, and also for "letting" her husband throw Ace around in the pool.

Any parent with an active son like Ace would likely watch that clip and see a sight that looked awfully familiar (and totally harmless). But sadly, there were also plenty of people who felt the need to chime in to say that Simpson and Johnson weren't keeping their son safe. When asked about the backlash by Extra correspondent, Mark Wright, though, Simpson said they were simply letting their son have a good time:

I posted Ace in the pool with a cast on because there is really no stopping a child. That’s him, he only has to have the cast on for three weeks, he was in the pool that day. I don’t even know if the cast molded on to him yet. Listen, it makes him happy and it’s kids being kids. He is in my husband’s hands. I know he’s okay.

What's more though, is that, even if the scene may have looked dangerous to some, the reality is that Simpson knew that Johnson could totally handle it. She explained, "if people were in that situation, if they had a husband like mine, they would feel comfortable."

Although that might not be enough to detract naysayers from leaving nasty comments, it's an important point. Simpson knows her husband, and she knows her son, too. Not only has she likely seen them playing together in a similar way countless times before, she also knows that Johnson is more than able to keep Ace safe. And for a 5-year-old who seems to love being active and taking risks? Having a father who can let him follow that instinct while ensuring he has someone there to look out for him is extremely valuable.

Of course, no parent ever wants to see their child get hurt, and while Simpson hasn't actually revealed how Ace broke his arm in the first place, she did share on Instagram that she "cried more than he did" when it happened. Having said that though, Ace is far from being the first kid to injure himself — and for a kid who seems to love doing stunts, it very well could be just the beginning. One thing that seems clear though: Simpson definitely has a lot of respect for her husband, and it sounds like he's a great dad who's the perfect match for their active son. She told Entertainment Tonight,

He's always throwing around the kids, and he's just an amazing father, it makes me want to stay young. Like how can you be so active? I mean watching the kids running makes me exhausted.

Simpson and Johnson's approach to parenting may not be a good fit for all couples, but it sounds like it definitely works for them. So while it may feel tempting to leave a not-so-encouraging comment the next time Simpson shares a clip of her husband and son playing together, it might be a good idea to remember that sometimes the most helpful thing you can do for another parent is keep your opinion to yourself.