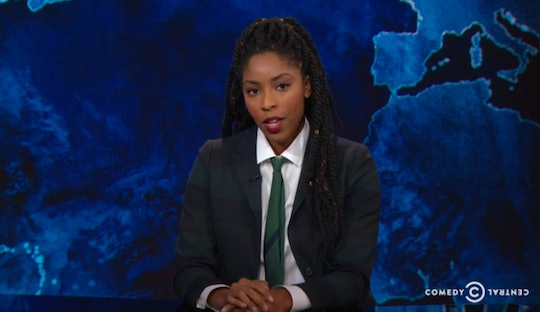 The Super Bowl offers a powerful platform. Football players become national heroes. Advertisers pay millions for 30 seconds of the audiences' time. And when the field clears for the halftime show, families across the country settle in for 15 minutes of over-the-top entertainment. This year, Beyoncé and Coldplay decided to use that attention to advocate for causes they care about, and the bold performances each quickly found their critics. But on The Daily Show with Trevor Noah, Jessica Williams' comments on Beyoncé's halftime show perfectly shut down haters.

This year's halftime show contained a message within a message. The headliner, Coldplay, promoted LGBT rights during its performance, according to a Mic analysis. Rainbow colors detailed singer Chris Martin's outfit and many of the set pieces, an audience member waved a pride flag over Martin, and the whole show ended with "Believe in Love" appearing as a message on placards in the stands. When Beyoncé made a guest appearance to sing "Formation," she led a group of dancers clad in black berets as a nod to the Black Panther movement. Beyoncé's performance of "Formation" focused on African American identity and advocated for the Black Lives Matter movement, according to The Daily Dot. The halftime show seemed to thrill the audience, but former New York Mayor Rudy Giuliani was not a fan. Giuliani appeared on Fox & Friends Monday to express his disapproval, telling the conservative news show's hosts,

I thought it was really outrageous that she used it as a platform to attack police officers, who are the people who protect her and protect us and keep us alive. And what we should be doing in the African American community and in all communities is build up respect for police officers.

Giuliani then called for "decent, wholesome entertainment" at the Super Bowl, a request that Daily Show correspondent Williams decided to answer. Sitting behind the Daily Show news desk, she started off by talking about Beyoncé's video for "Formation", which had been released Saturday before the Super Bowl. She described how the video addressed self love, police brutality, and even Hurricane Katrina. She then showed clips of some of the performances' critics before answering the question, why was race brought in?

"Race was brought in because Beyoncé was brought in, and brace yourself, you might want to sit down for this, but Beyoncé is black," Williams scolded. "And as a black person, you walk around every day constantly reminded that you are black."

Williams went on to say that Beyoncé, like many artists, shares her message through her music. She addressed Giuliani's belief that Beyoncé should know her audience is middle America by challenging the idea that middle America is unprepared to talk about race. Of course, she also addressed Giuliani's preference for "wholesome" entertainment. "I am so sorry that this wasn't wholesome enough for you," said Williams. "I didn't realize that singing about race was equivalent to Janet Jackson getting her ti**y pulled out at the Super Bowl."

In under four minutes, Williams reminded America how important it is to let artists be advocates. Out of all this week's superstars, Williams was definitely one of Super Bowl 50's biggest winners.