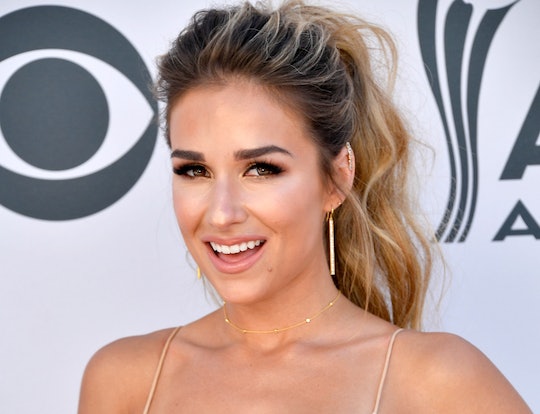 Boy, some people just love to judge others. It's human nature, I suppose, but the thing is, you don't actually have to broadcast those judgements to the world. You can keep them in your head and let other people live their lives. But when you combine the three most tempting pieces of judgement bait — internet anonymity, celebrities, and mothers — you know the pearl clutchers are going to come running, and that's just what happened in the comments of a recent Instagram pic of Jessie James Decker drinking while breastfeeding.

The country singer and her wide receiver husband, Eric Decker, who just signed with the New England Patriots on Thursday, welcomed their third child, Forrest Bradley Decker, on March 31, according to People. Their daughter, Vivianne Rose, is 4 years old, son Eric Jr. is 2. So at this point in her ~motherhood journey~ you'd expect Jessie to be both more skilled, and more relaxed. And you'd be right, as she demonstrated in a social media post that shows her lounging in an armchair surrounded by pillows, one boob hanging out of her t-shirt, with both an infant and a glass in her left hand (and the other one is giving a peace sign, sorry not sorry).

"Cheers bitches," Decker captioned the pic, which is exactly the vibe her defiant duck face gave off. I've got to say, I find it a lot more endearing than that now-infamous Instagram pic of her fellow Patriots wife Giselle Bündchen breastfeeding while multitasking a few years ago, but I'm just one person. Guess how the internet at large felt about a woman they've never met sipping from a champagne flute while nursing. That's right, not happy! To be clear, we don't know for sure that the liquid in that glass is alcohol, nor do we know if she actually consumed any of it. And there were a fair amount of comments applauding her post. But then came the haters.

"This should be a time when you're cuddling that baby and making it feel welcome. Not thinking of yourself," wrote one complete stranger. Maybe I'm misinterpreting things, but it looks to me like she is cuddling Forrest, and if someone put their nipple in my mouth, I can't say I'd feel unwelcome. As for thinking of herself, mothers are human beings, not babies' servants, and it's perfectly OK for them to think of themselves! You can actually think about yourself and someone else at the same time, believe it or not.

"Why does anyone think it's okay to drink and breastfeed?" another person puzzled. "I can't imagine it is. This movement is a bit strange." I must have been left off of the mom listserv or something, because I didn't get any notice about a drinking and breastfeeding movement. What color ribbon should I be wearing?

Some didn't seem to mind the drink, just the breast: "there's no need to post photos of yourself breastfeeding 24/7." And the weirdest concern-trolling I've seen in a while: "Looks like her nipple is off to side of her boob. Doesn't look normal to me." Thank you so much, anonymous internet gynecologist! Can you do me next?

Others called Decker stupid, a pig, an alcoholic, and a "female begging for attention because she's a failure at everything else," while the more mild comments expressed concern that she was setting a bad example for "all of the young nursing moms" who might "think it's ok to do what she's doing." So let's set the record straight. Young nursing moms, please do not take any medical advice from the comment section of a country singer's Instagram account. Here's what the American College of Obstetricians and Gynecologists has to say about alcohol and nursing:

If you want to have an occasional drink, wait at least 2 hours after a single drink to breastfeed. The alcohol will leave your milk as it leaves your bloodstream — there is no need to express and discard your milk.

It takes time for alcohol to enter the bloodstream after consumption, and a baby Forrest's age probably nurses every 3 to 5 hours, per the American Academy of Pediatrics, meaning that by the time he's ready for more, that milk will be perfectly safe. So calm down, everyone, and worry about your own kids, especially the example that you're setting for them when you troll strangers on the internet.