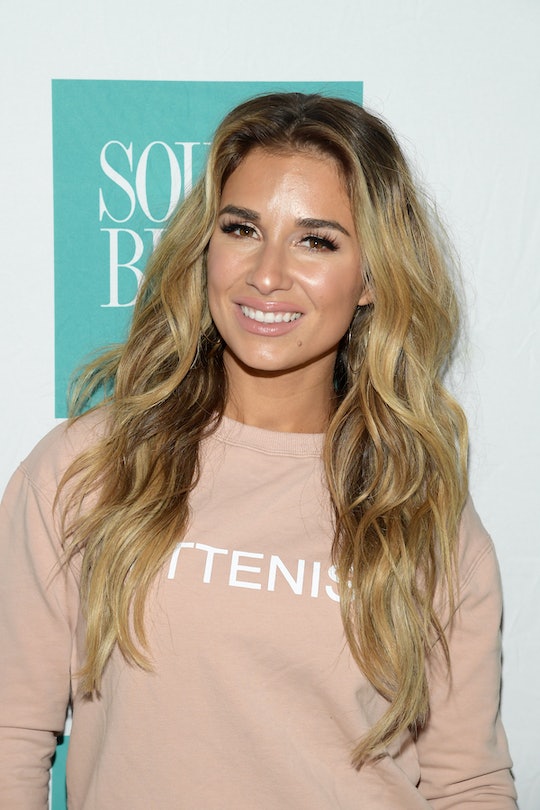 Jessie James Decker is confident in a way only a seasoned mom of three can be. It's the kind of confidence that can, honestly, be off-putting — at least to a newly minted mom of two who, quite frankly, is struggling to keep her head above water (read: me). But if you can get past the country music star's intimidating self-assuredness and your own underlying self-judgment, there's a lot a mom can learn from Jessie James Decker's parenting philosophies. For example, if you want your kids to eat, stop giving them options when it comes to food.

"I think I’ve been lucky as far as my kids and their eating habits," Decker tells Romper. "I think because I haven’t given them that many choices — what I make is what you get — and the mentality has really, I guess, kind of trained them in a way to not be picky eaters."

In the Decker household, if mom is making a salad and some salmon and couscous, that's what the children are having for dinner. "And they're not going to fight me about it," Decker says straight-faced. "Because then they just won't get any dinner."

Decker's three children are 5, 3, and 14 months, so it all sounds easier said than done. But for Decker, the key is to not make things complicated. "They're going to eat," she says. "They eventually will eat, so you just have to kind of break through that. It's just like any other situation where you just have to tell your kids 'no' and they will learn."

When you start to make it a thing you overthink about it. In my home, I don't do that.

My 4-year-old son has refused to deviate from a consistent diet of boxed macaroni and cheese, chicken thighs, and Ritz Crackers, so Decker bypassing the whole "please dear god child eat something anything I don't even care" struggle is nothing if not disconcerting. (Clearly, on some level, I just need to believe I'm not the only one.) But she's unwavering in both poise and credence, especially as she begins to speak about her mother and how her own upbringing instilled in her the ability to lay this "no options" policy with her children.

"I got that mentality from my mother," she says. "My mom raised me to be that way — all of us kids — and to this day, all three of us, we're not picky eaters. We will eat anything and everything. We will try anything. We're brave eaters because we've been eating that way since I can remember. So it's really important to me to instill that in my children, and it's working thus far."

Decker is already seeing the fruits of her labor, especially as the confidence to try new foods seeps into other areas of her children's lives. Most recently, she says, there was an event at her 5-year-old daughter, Vivian's, pre-K class. "All us parents had to bring in a certain fruit and vegetable and all the kids were able to try them all in like a little tasting," she says. "And Vivi was willing to try every one and the teacher pulled me aside and said she wanted to try — and did try — everything. And that made me really proud, as a mom, that she was so confident in that and not afraid to try that."

My mother always had a great relationship with food, so we kind of follow what we see.

My 4-year-old son's teachers are constantly telling my partner and I that he's sneakily throwing away his food in the hopes he can secure a bag of pretzels instead, so my eyebrows are raised at this point. But Decker is calm in a self-assured, "I've got this parenting thing down" kind of way, especially as she talks about not making meal time a "big deal" in her home — a decision that has, clearly, panned out in her favor.

But many parents have made eating — or at least conversations about eating — "a thing." A 2017 from the University of Maryland found that only one-third of parents believe they're doing a good job shaping their child's eating habits, and only 17 percent would rate their child's diet as "very healthy." And in what can only be described as an over-correction, many parents are now obsessing over what goes into their kids' bodies to an unhealthy degree. As Tiffany Rush-Wilson, an eating disorder counselor, told The New York Times in 2009, "I have lots of children or adolescent clients or young adults who complain about how their parents micromanage their eating based on their own health standards and believes."

We want to instill those good nutritional values in our children.

And now her children are following what they see: a mom who won't make a big deal about mealtime because if you don't like what she has provided, you won't eat. And while Decker does admit to relying on some "quick meals" when she doesn't have all the time in the world to devote to a gourmet meal ("I’ll have canned green beans in the pantry and I'll cook those up with a little olive oil and onion on the stove and that’s a super quick solution. We always have sandwich bread, deli meat, and cheese."), she knows what works and isn't willing to budge. In other words, she's not going to "cop out" and use a microwave to appease her children... or anyone else's.

And if there are gaps in her children's nutritional needs, Decker relies on Enfagrow, a new nutritional toddler drink from the makers of Enfamil. Decker is a celebrity brand ambassador for the product, and says she has no qualms about admitting she relies on it when necessary. "I do have a 14-month-old son, Forest, and this is an amazing solution for me," she says. "I am using it at home and I am here to definitely share my experience and say, 'Hey, I'm giving Forest Enfagrow, he loves it, and I feel really good about this choice because he is getting all the nutrition and vitamins he needs."

Feeling good about our choices is, of course, what we as parents want to feel at the end of the day. And it's clear that Decker' isn't losing any sleep over her children's eating habits.

"We want to instill those good nutritional values in our children," she says. "And it's working."

BRB, practicing my "it's this or nothing for dinner" face.