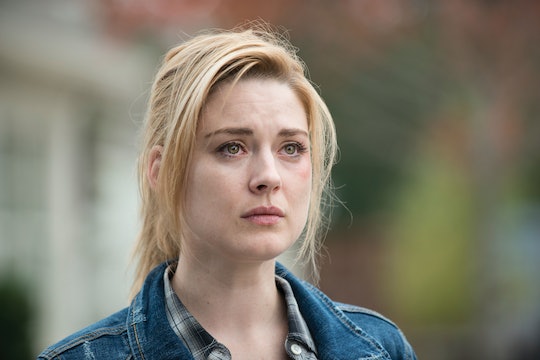 You can't say you didn't see it coming. During Sunday night's big mid-season premiere, Carl was left terribly maimed, and not one, but two major side-characters were given the boot in the most brutal way possible. While fans grieved over Carl's unfortunate injury, however, it was Jessie's death that had The Walking Dead fandom spouting mixed reactions on social media.

Readers of the original graphic novel series by Robert Kirkman had predicted Jessie's death on AMC show long before it happened. In fact, loyal Dead fans may have been a little bit surprised by how closely Sunday night's script matched up with the comics: On Monday night's episode, "No Way Out", Jessie (played by Alexandra Breckenridge) watched as her son Sam was overtaken by a pack of walkers (that's zombies, for those of you non-TWD loyalists) and eaten, before being bitten and overtaken herself — that was right after her boyfriend, Rick, you know, cut off her arm with a machete because she wouldn't let go of son Carl's hand. Oh — and then Michonne stabbed her one remaining son, Ron, because he was being a brat. Nice. And here I thought the one month anniversary present was paper or something.

In the original canon, the plot is pretty much the same, with the one difference being that Ron is actually Sam, and the AMC version of little Sam doesn't exist. (Which, I guess, is better than being eaten by zombies. Right?) Still — despite the fact that the deaths weren't totally unexpected, they still left a big impact on the fandom itself.

"So pissed Jessie is dead," tweeted one fan, following up the sentiment with a cluster of teary faces and broken-heart emojis (as one does). "Walking Dead was so good," tweeted another fan, "[but] sad to see Jessie go."

Still others made sure to voice their dislike of young Sam and Ron (ouch!) in their tweets, with one user writing, "I hated Jessie's kids... but her dying hurt."

Not everyone was sad to see the mom of two and her kids leave the show. "Thank goodness Jessie, Ron, Sam died in The Walking Dead," wrote one fan. "They were annoying!" Added another user, "Good bye Sam, Ron and Jessie - you will not be missed!"

Regardless of what fans felt, though, it was Breckenridge herself that harbored some of the biggest emotions of the night, telling EW in an interview on Sunday night,

Oh, it was just super sad. It was just really sad. I mean, this mother is watching her child be eaten alive. I can’t think of something worse, I really can’t. It’s just excruciating, and so being in the moment as an actor was just horrifying. But almost all of the series regular cast came out to watch that night and be there as support, so that was pretty incredible. We shot until 6 in the morning, and yeah, but there were a few people that literally stayed until 6 in the morning with me just because they wanted to be there and be supportive.

Whatever your thoughts on the matter, you can't deny that Breckenridge is leaving behind some big shoes on the Walking Dead set — and so for that reason alone, we bow our heads for you, Jessie. You will be missed. (Sort of?)