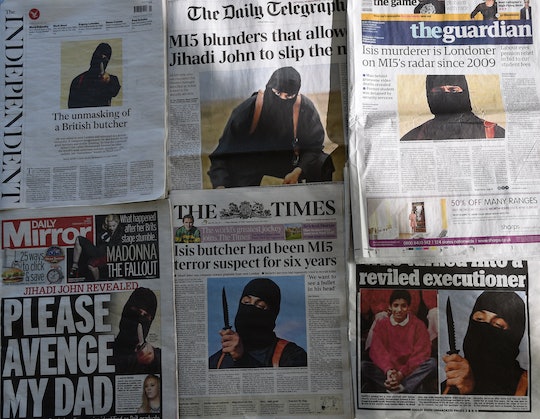 "Jihadi John" Targeted in U.S. Airstrikes, But His Fate Is Still Unknown

A year after he rose to national attention when he executed U.S. journalist James Foley on camera, a member of ISIS became a target for military in Syria. The U.S. launched airstrikes against Jihadi John, the Pentagon confirmed Thursday, attempting to take out the man who is also known as Mohamed Emwazi. It is unclear at this time whether or not the airstrikes had successfully killed Emwazi. But it's a little more clear if you ask some officials — according to FOX news, a U.S. military source said, "we are 99 percent sure we got him."

Update: The Pentagon says that they are "reasonably certain" that Emwazi was killed in the strikes, Reuters reports.

No one, however, is going on record saying such, with U.K. Prime Minister David Cameron telling reporters Friday that they still didn't know whether Emwazi — who was born in Kuwait but raised in London — was still alive. (According to reports, Emwazi first got involved with radicalism after a 2009 trip to Tanzania.) Cameron did label the airstrikes as "a combined effort," however, between the U.S. and the U.K., and mentioned that, if successful, the strikes would be catastrophic for the militant group.

If this strike was successful, and we still await confirmation of that, it will be a strike at the heart of ISIL.

The air strikes — which Cameron called an act of "self-defense" — took place in Raqqa, Syria, and activists in the area reported hearing "a dozen blasts" near a vehicle that reportedly held Emwazi on Thursday night. A U.S. official told reporters that they used drones in the strike.

And Cameron isn't the only person praising the air strikes — The Ramadhan Foundation's Mohammed Shafiq pointed out the magnitude of the possible killing of Emwazi, who not only was seen on video executing Foley, but was also behind the murder of several other ISIS hostages.

The killing of Mohammed Emwazi in Syria is a significant moment in the fight to get justice for David Haines, Alan Henning and all the victims of this evil man.

The U.K. Prime Minister's also told reporters that the families of Emwazi's victims have been notified of his possible fate.

Britain has been working hand in glove with America over the 'Jihadi John' drone strike, to defeat (ISIS), and to hunt down those murdering hostages. The Prime Minister has said before that tracking down these brutal murderers was a top priority.

Obama has not yet spoken out about the airstrikes, but is expected to discuss it with world leaders at a two-day summit in Turkey on Saturday.