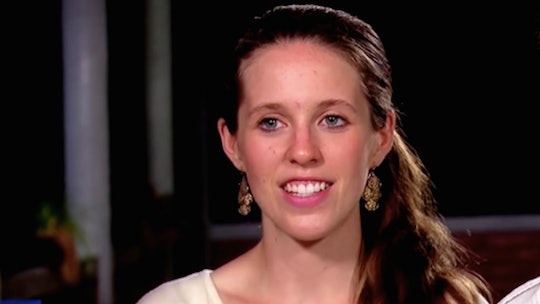 People Think Jill Duggar Is Hiding A "Bump" In This Photo, But Let's Calm Down

If you happen to be a fan of TLC's Counting On, then you're probably still reeling from the recent bombardment of pregnancy announcements. That's because so far in 2019, five of Michelle and Jim Bob's adult children have revealed they're expecting a baby. It's a full-on Duggar baby boom! There are so many buns in the oven, it seems like some fans are hawking over the other married couple's social media — looking for any and all signs that they, too, might be pregnant. And apparently, Jill Duggar pregnancy rumors are swirling after she shared a photo fans think hides a "bump."

On Thursday, May 23, Jill took to Instagram to share a few photos promoting her cousin Amy Duggar's fashion boutique 3130. It was the typical, "OMG, aren't these dresses so awesome?!" promotion spiel. Except, pretty sure literally no one read the caption anyway. Because Jill's followers were all too preoccupied with the main photo of her awkwardly holding a large 3130 bag in front of most of her body. It didn't take long for the speculating comments to start pouring in.

One Instagram user came right out and addressed the elephant in the room, writing, "I think someone’s pregnant."

Yet another follower wondered, "Humm 🤔is Jill hiding a baby bump 💞."

Another person declared, "I think we might be hearing about one more Duggar is expecting, due in 2020."

Check it out for yourself!

If you scroll over to the third photo in the carousel, Jill is wearing a super loose-fitting dress that only adding fuel to the fire. Because the dress is so baggy, you can hardly see any outline of her body — another clue, according to some people.

Still, some Instagram users totally called the bump watchers out. One person commented, "Omg you people are as baby obsessed as they are! Can’t even take a pic."

But I mean ... Can you blame Counting On fans at this point?

One commenter made an excellent point, writing, "She is sooo pregnant! Due early next year! Hence why Jessa said 'there’s 5 of us due THIS year...'"

If your'e confused, Jessa Seewald recently shared that all of the pregnant Duggar women expecting in 2019 will be getting together soon for a photoshoot. Her exact words were: "We are actually planning a sisters' photo shoot with all 5 of us due this year!!!"

However, Jill could theoretically be pregnant and only be in the first trimester — meaning she could technically be expecting a 2020 baby. (See what Jessa did, there?) She wouldn't actually be lying by omitting "and the sister who is due next year" from that statement.

Despite the Duggar baby boom, Counting On fans should probably calm down and stop pestering the other siblings who aren't confirmed to be expecting. (Jill, Jinger, and Abbie.) Because let's face it: Unless a woman has announced she's pregnant, it's 100-percent rude to ask her about it — in person or on social media.