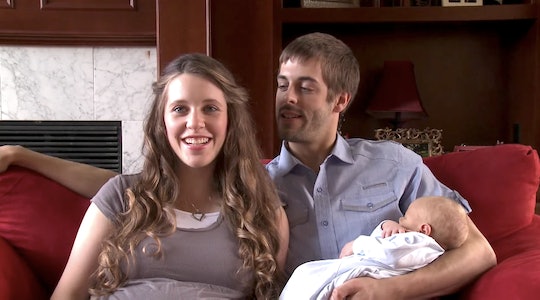 Jill (Duggar) Dillard and her husband, Derick Dillard, of TLC's Counting On, revealed in December that they are expecting their second child together — a baby boy. They've already had a lot of practice at being parents; they have one son, Israel David Dillard. Jill Duggar's quotes about parenting show she really loves being a parent to Israel, and she's excited to take on the challenge of being a mom to her second baby as well.

According to In Touch Weekly, Israel Dillard is 2 years old, so he won't be too far apart in age from his little brother, who is due relatively soon. Jill told People that she and her small family have returned to the United States after doing ministry work in Central America, in time for Jill’s July due date.

In the past, Jill has been asked about motherhood many times, which is not surprising, since she's from a family with 19 kids (and no longer counting). Jill and Derick are also open to having a lot of kids, and Jill once told ABC News:

Both of us want as many kids as God will give us and we've talked about adoption...My parents have kept popping them out so we'll see how [our] fertility is!

One place where Jill regularly writes about her son is on the Dillard Family Blog. In April, she and Derick celebrated their son Israel's birthday by posting a photo of him holding a "2" candle. The message from "Mommy and Daddy" said:

It's so hard to believe our little Israel is already 2 years old! He loves playing play-dough, basketball, soccer, football, killing bugs, reading books, eating food and running with Daddy! Israel, we pray you will grow up to love Jesus and serve others! You are a sweet little guy and we love you so much!

She's also said on the blog that she and her son make banana bread every week together, and that her little family is "my greatest mission field." She's clearly totally devoted to her family, and to being a mom to her toddler son.

But she also told People back in April that she doesn't pretend to have the whole parenting thing down. She told the publication:

You learn things as you go along...We’re far from mastering any skill of parenting, but we do pick up on little tips here and there from Derick’s mom, my mom. We’re always asking questions of other people.

I think most parents would say there's no shame in asking other moms and parents for advice.

In January, Jill and Derick revealed the sex of their second child, and Jill couldn't contain her enthusiasm in the announcement, according to AOL:

We're really excited about having another son...I know that Israel and this little one will be best friends.

And when Jill's sister, Jessa, also gave birth to a son, Jill was just as excited for her sister to be a mom along with her. United Press International reported that after the birth of Jessa's son, Spurgeon, Jill said on her website:

I'm so excited to both be on this motherhood journey together! I pray our boys will love Jesus with their heart, soul, mind and strength and love others more than themselves! ...It will be so fun to see them experiencing things and going thru similar stages within a few months of each other.

So Jill is clearly enthusiastic about being an aunt as well, if posts like that are any indication.

And many of Jill's posts to her Instagram feature her little boy, with various captions showing just how much she loves being a mom. Some of the posts include quotes like, "This little kid keeps us laughing!," and hashtags such as "#lovemylittlebaby."

And even before she was a mom herself, Jill was enthusiastic about motherhood. According to Us Weekly, the Dillard's announced on their blog in September 2015 that Jill was officially certified as a professional midwife.

It sounds like being a mom, or helping others to become mothers, has been something Jill's been passionate about for a very long time.