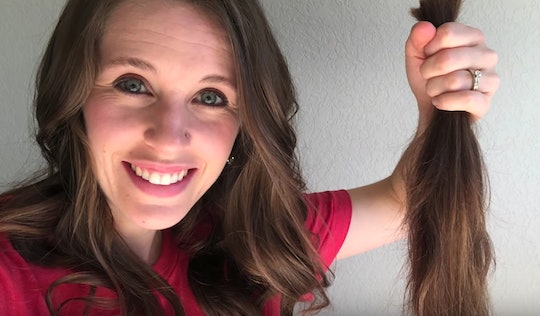 The Duggar daughters are often associated with their conservative wardrobe and long locks, but one former Counting On star recently went through a major makeover. On Friday, Jill Duggar revealed she's rocking a new, shorter hairstyle and cut off more than a foot of her mane for a worthy cause.

In a blog post on her website she shares with her husband, Derick Dillard, Jill revealed that she had actually never gotten a haircut or even a trim while she was growing up until she was about 14 years old. Up until this week, Jill said she only had fewer than six inches trimmed off of her hair.

But when it came time for Jill's bi-annual trim, she was ready for change. She said her hair was "getting to be hard to manage, the boys were getting tangled in it, I was sitting on it, and the weight was contributing to headaches."

So, Jill decided to cut her hair by 14 inches and she documented the whole process on a vlog on YouTube.

Jill's haircut wasn't done just to relieve herself of bad headaches and make her life a little simpler; she is also planning on donating her ponytail to be used in a wig for people who have lost their hair.

"I've seen that there are several organizations who take hair donations and make wigs free of charge for people who have lost their hair and I look forward to donating mine to one of these — I just don't know yet," she wrote.

While this is a big change for Jill, she seems to love her new look. "I love it and it felt so much lighter right away!" she wrote on her blog.

She isn't the only one who is loving the haircut — her followers took to the comments of her most recent Instagram photo to compliment her on her new hairdo. "Your hair looks cute, Jilly," her younger sister, Jessa Duggar, wrote, while her husband added, "Lookin' good baby!"

And, hey, if she ever wants some tips for styling her new cut, she can always head to her sister's Jessa's YouTube channel, where she posted a video teaching her followers how to curl their hair in 15 minutes.