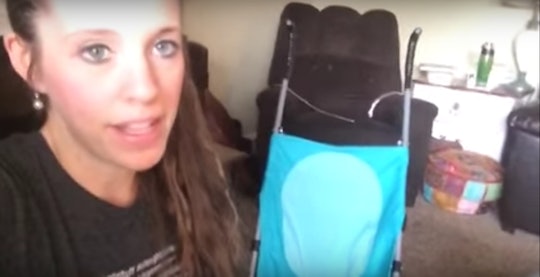 Growing up with 18 brothers and sisters will definitely teach you a thing or two about taking care of little ones, so it's no surprise that the Duggars seem to have all sorts of parenting tricks and hacks up their sleeves. Yet while the family seems more than happy to share them on social media, not all of them are worth following. Case in point? Jill Duggar shared a car seat hack on her website Thursday, according to In Touch Weekly, and while the mom-of-two seemed pretty proud to share her alternative to carting around a clunky stroller in order to accommodate an infant car seat, her tip was one that left many of her followers seriously concerned.

Though Jill is no longer involved with her family's TLC reality show spin-off, Counting On, she is still active on social media, and recently she and husband Derick Dillard announced their family's revamped website — presumably a sign that they intended to continue to maintain their public profile despite not actually being on TV. That's meant that Jill's been more active online as of late, updating new photos, videos, and recipes to the site, but while interest in the couple still seems high, the feedback they've been getting isn't always positive. In the latest post, for example, Jill revealed her "trick" for combining an infant car seat with an umbrella stroller, and while she considered it a clever solution, her followers definitely didn't seem to agree.

In the video, posted to both the Dillard Family website and the couple's YouTube channel, Jill shared her stroller hack, and explained that it was something she'd actually learned from her mom, Michelle. Jill said that it's something she now does "all the time" when she's going to church, or when she just doesn't want to have to lug out her main stroller that was designed to fit her car seat.

It totally makes sense that Jill would want a way to do this: stroller travel systems with car seat adapters can be heavy, cumbersome, and wide, while umbrella strollers are often much lighter, easier to fold, and generally take up much less space (which makes them especially great when traveling). Unfortunately, her solution — which is literally to just hook the car seat over the umbrella stroller handlebars — doesn't exactly seem to be the safest idea. In response to Romper's request for comment regarding the safety of her stroller hack and her fans' concerns, Jill says via email:

I can say that it has worked very well and has proven very useful in many situations for both the Duggar family and the Dillard family over the years.

There's a good reason, after all, why umbrella strollers aren't actually the go-to for moms with infants. For one, they're designed for older children: according to Child Safety Experts, lightweight, umbrella-style strollers aren't recommended for "newborns or infants who require a fully reclining seat and head and neck support," unlike traditional strollers or travel systems, which are designed to be used right away.

By attaching the infant car seat, Jill is obviously trying to solve that problem (in the car seat, babies would get the head support they need, as they're reclined), but the added weight of the car seat to a stroller specifically designed to be lightweight? It definitely seems like it'd be super unstable.

Although some commenters did praise Jill's "trick" as being a smart solution — with a few even saying that it was something they've done themselves on occasion — most of the comments took her to task for encouraging people to try it out. One commenter said that the hack was "a completely inappropriate and ridiculous thing for Jill to share," while another wrote, "Jill, I mean no disrespect but those strollers are so not sturdy enough for a car seat with a baby in it."

And, given that, with Jill's hack, the car seat actually sits in the stroller at a similar angle as the stroller seat itself, another commenter noted that, really, you might as well just go without the car seat entirely:

If they're old enough and strong enough to be placed sitting upright like that why not just put them in the fricking stroller, Instead of hooking a car seat to the stroller!?

For parents who really want an umbrella-style, infant-compatible option, there are already products on the market meant to solve the conundrum — car seat frames like the Snap-N-Go, for example, allow parents an alternative to carrying around a car seat without needing a full stroller. And though they involve the added cost of specifically purchasing an additional piece of baby gear, at least the safety issues — like tipping hazards — have been addressed.

To be fair, Jill also seems to regularly use her larger stroller, as well as other solutions, like slings and baby carriers, so it's not like her umbrella stroller trick is even something she considers to be a go-to. But while she obviously isn't intending to do much more in the clip than pass along something she thinks might make other parents' lives easier, her position as a public figure makes that advice seem particularly dangerous. Carting around an infant car seat might be a pain, but honestly, this is one tip moms will probably want to ignore.