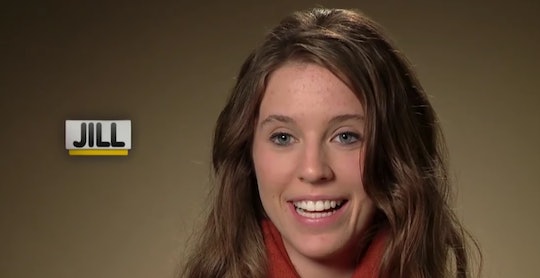 Jill Duggar has practically grown up in front of TV cameras. Before her family was a mainstay on TLC, starring in reality shows like 19 Kids & Counting and Jill & Jessa: Counting On, Duggar and her family members were a part of TV specials which documented the growing size of the family. Because of this, Jill Duggar then and now photos are kind of alarming, because they show a huge transformation for the reality star.

The Duggar family made their first TV debut ever in an hour long special called 14 Kids & Pregnant Again, according to InTouch Weekly. Back then, things were a little different, but then again, it was filmed in 2004. In the special, every one is very dressed up and the house they were living in was much smaller than the one they have today, according to InTouch Weekly. And at the time, Jill Duggar was only 13 years old.

In the 14 years since then, Jill has grown a lot. She's lived overseas, got engaged, got married, and has had two kids. And although Jill is currently loving her life as a stay at home mom (and documents it all on social media), it is super fun to see how far she has come.

As previously stated, Jill was 13 when she appeared on 14 Children & Pregnant Again, and it definitely shows. In a still from the special, posted to YouTube, Jill looks so much different without her modern looking clothes and makeup. But, it's important to remember that she was only a teen then, and it was probably so embarrassing for her to have her awkward years documented on TV.

Just two years later, Jill appeared in her family's newest special, 16 Children & Moving In, which premiered in 2006. Jill was still a teenager at the time and it definitely showed. Not everyone can say that they had their awkward years filmed for a national audience except the Duggar children.

Two years (and two siblings) later the Duggar family was given their own reality show on TLC called 17 Kids & Counting in 2008 and then 18 Kids & Counting, according to Entertainment Weekly — and the show did not fail to capture all of the Duggar milestones — from the girls getting braces to welcoming new siblings.

"I really love what I am doing and am thankful for all these amazing opportunities," Jill wrote in a TLC blog in 2013.

19 Kids & Counting was also able to capture one very important milestone in Jill's life — when she met and began courting her future husband, Derick Dillard. In 2013, an episode of 19 Kids & Counting documented Jill meeting Dillard for the first time in Nepal, according to InTouch Weekly.

After 19 Kids & Counting was canceled in 2015, according to the Washington Post that wasn't the end of cameras capturing Jill's journey. Jill & Jessa: Counting On premiered a few months later in December 2015, capturing Jill and her sister, Jessa Duggar's journey to becoming wives and mothers, according to Variety.

On Jill & Jessa: Counting On (which is now just called Counting On) fans were able to see Jill raise her first son — Israel David Dillard in 2015 — and watch her go through her second pregnancy with son Samuel Scott Dillard in 2016, according to People.

After Jill and her husband left Counting On in 2017, according to People, fans have still been able to keep up with the mother of two, thanks to her Instagram account, where she frequently posts.

Over on Instagram, Jill has been able to document the growth of her two sons (who seem to get bigger every day) and show off the highlights of her relationship with Dillard.

But Instagram isn't the only place that Jill has been documenting her life. Jill also runs a blog, called the Dillard Family, where she frequently posts recipes, videos, and family updates — so her fans can still keep up with the couple, even if they aren't on the TLC reality show.

Jill is still a certified professional midwife, according to InTouch Weekly, but it isn't exactly clear if she is still practicing.

Jill, however, is clearly loving her life as a mom to her two sons and supporting her husband — who is currently in law school at the University of Arkansas, according to the Dillard Family Blog.

It's been incredible to watch Jill's journey over the past 14 years — and thanks to social media, people will still be able to keep up with that same journey. From a teenager to a mom of two, Jill has had a huge transformation.