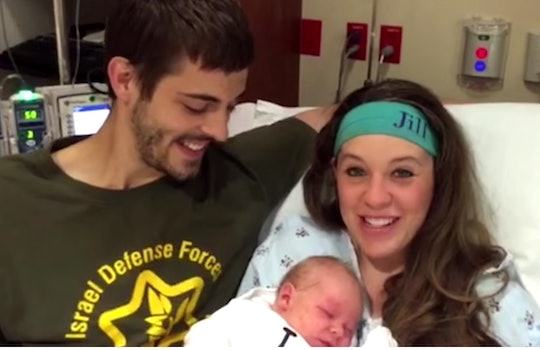 Michelle and Jim Bob Duggar — the ultra-conservative, Arkansas couple with a whopping 19 kids — managed to captivate the nation for more than a decade before their show, 19 Kids & Counting, was canceled back in 2015. Since then, the Duggars have handed off the reality TV baton to their adult children for the equally popular TLC spin-off, Counting On. Which makes sense, considering at any given point in time, there's bound to be a Duggar entering into a courtship, getting engaged, planning a wedding, or announcing a pregnancy. Keeping things interesting, many of the Duggar women have chosen to experience labor and childbirth in the comfort of their own homes. Still, Jill Duggar's birth story serves as a reminder that home births don't always go as planned.

Jill and her husband, Derick Dillard, welcomed their second child — a son whom they named Samuel Scott — in July 2017. Like they had planned with their first son, the couple set out to have a home birth with baby number two. “The newest addition to our family arrived on Saturday, July 8, 2017 at 1:02pm," the Dillards told People. He weighs 9lb 10oz and is 22” long. After 40 hours of labor, he was delivered via C-section at the hospital. Thank you for your continued prayers and support!” Oddly for the social-media-loving, young parents, few details about Samuel's birth story were shared — and a photo wasn't posted on Jill's Instagram until July 25.

In fact, Jill's followers were worried about her and baby Samuel after she posted a cryptic photo of a Bible verse the day before," Cafe Mom reported. "Such a great reminder from the Bible," Jill wrote on Instagram, alongside a photo of the handwritten Bible verse on a sticky note. "It's easy to praise God when things are going great, but do we continue to count our blessings when things aren't going like we planned?" Concerned fans chimed in with words of encouragement, while also speculating about the meaning behind the message. "If Jill had a second C-section, I can imagine she isn't feeling that well," one Instagram user wrote.

Others feared a health scare might be the reason for Jill's post. "Prayers," one person commented. "Hope everything is okay with you and little Samuel." Still others wondered that Jill might have had a hysterectomy as a result of birth complications, as Hollywoodlife.com speculated. "Just remember that even if you can't have any more natural children, there are many opportunities to adopt," yet another Instagram user wrote. "Or maybe, just maybe, He wants you to care and tend for the two boys you have. There is no shame in having 2 or 20."

Because neither Jill nor Derick have gone into great detail about the circumstances surrounding Samuel's birth, it's hard to say for sure what the social media delay/Bible verse actually meant. Who knows? Maybe she was suffering from postpartum depression? Or, perhaps she was just overwhelmed in her new role as a mom of two? For all anyone knows, Jill could have been bummed that she didn't still didn't get the natural birth she had wanted.

If you remember, Jill's labor and delivery with their first child, Israel, was no walk in the park, either. Jill ended up laboring for a whopping 70 hours before delivering Israel via c-section. (Yes, you read that correctly.) According to People, Jill was 41 weeks and five days pregnant when her water broke at home.

After about 20 hours of laboring from the "comfort" of her own home, Jill ended up going to the hospital after all. The reason? Meconium — the first, sticky, black bowel movement from a baby — was detected, which can be a sign that the fetus is in distress. “I was praying to God to give me strength,” Jill told People. “I was really scared and nervous, but I was praying.”

After arriving at the hospital, Jill continued laboring without pain medication or being induced. Finally, 70 hours into labor, doctors expressed concerns about the baby's position and irregular heart rate. That's when the Dillards decided to proceed with a c-section. Little Israel David Dillard was (finally!) born on April 6, 2015, Today reported.

It seems Jill and her birth team were well-prepared for the possibilities and ultimately made the right call to head to the hospital during both of her labor experiences. Whether labor and delivery happens at home or in a hospital setting, it's important to remember the unexpected can always strike. Sure, expecting parents may take the time to draw up a detailed birth plan. But all of that planning can go out the window in an instant — as Jill's birth stories remind us.