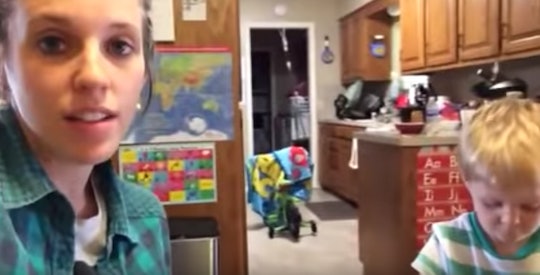 The Duggar family — some of whom star on the TLC reality show Counting On — are known for doing things "their" way. Mom and dad, Michelle and Jim-Bob Duggar, have created their own rules and traditions for their household and abide by them, and their kids are now doing the same for their own families. Take mom of two, Jill Duggar, for example, who recently revealed that she is starting to homeschool her son, Israel, with husband Derick Dillard. Because the Duggars march to the beat of their own drum, it shouldn't come as a surprise that Jill Duggar's homeschool curriculum with Israel is a little unique and involves a pretty special incentive.

Jill is a mom to two boys, 3-year-old Israel David and 1-year-old Samuel Scott, and has been quickly learning the ropes of parenting. Based on how much time parents spend with their kids when they're little, there is so much that they can teach their own kids. So, even though Israel is only 3, Jill is using her time with him wisely — by "homeschooling" him or attempting to teach him things at his young age.

In a video, posted to her YouTube channel, Jill revealed that she is starting to teach Israel a few things, like "phonics and stuff." Jill told followers that she is following a few curriculums — Sing, Spell, Read, and Write, which uses multi-sensory tools to teach kids about the alphabet and literacy tools, according to Rainbow Resource — which she revealed her mom also used with all of her siblings "and it worked really well." Jill also revealed that she loves using the book Teach Your Child To Read In 100 Easy Lessons, a book that states that parents can teach their pre-school aged children to read within 100 days.

But learning in Jill's household also entails one very enticing reward: candy. In the video, Jill explained that Israel's favorite part of the lesson is the treasure box, which is filled with rewards (aka tasty candy), given to him when he is done with his school.

Although Jill revealed that they haven't started a lot of the math curriculum yet, the fact that she is teaching her son how to read at his young age is pretty exciting. "I'm no professional at all but this is just what we've enjoyed and Israel loves school right now, so we're trying to just keep him busy with that," Jill said in the video. "And it's fun."

Although it is unclear if Jill and her siblings will continue on with this tradition and homeschool their own children, Jill's current homeschooling program seems to be working well for her oldest son. And the candy reward definitely doesn't hurt, either.