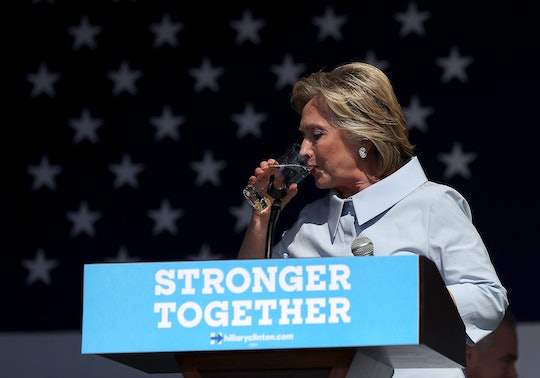 On Labor Day, while most of America was mourning the end of summer and firing up the grill for the last time, Democratic nominee Hillary Clinton began a speech with a coughing fit. It was brutal to watch, as anyone who has spoken in public and felt the urge to cough can attest to. Even more brutal, though, were some of the responses about what is now known as the infamous 2016 "hack attack." Even Green Party candidate Jill Stein tweeted about Hillary Clinton's health and then deleted the comment.

Thanks to screenshots from scrupulous Twitter users, however, the now-deleted tweet can still be read in it's original glory. "#HackingHillary, here's my prescription: Take a #JillChillPill and stop campaigning altogether to ensure global peace," Stein wrote. "#PagingDrStein." It's worth remembering that Stein is a physician by trade, but even so, she probably shouldn't be speculating about someone's health without a proper, private examination. Since it was quickly deleted, it looks like Stein's team immediately noted that the comment wasn't going to play well with voters — and they were right.

So, what's so bad about joking about another candidate's health in an attempt to pull them down? Everything about it is pretty low. It's petty to call out a candidate for being a human being and having a cough attack, for any reason. It's even more petty since Republican nominee Donald Trump and some of his supporters have been questioning Clinton's health and whether or not she is fit to serve as president. Having a cough attack doesn't seem to be a sign of any chronic illness, since Clinton has released full medical reports. It's more likely that she was tired, talking too much, and maybe even had allergies, as her campaign noted on Tuesday. Occam's razor is usually the best solution to any quandary.

The focus on Clinton's health is pretty unfounded and a silly sideshow to the campaign, since there are some major issues at stake — you know, like the economy, national security, and immigration reform. Trump, who released a letter from his doctor that had no valid health information, would rather speculate, it seems, about a 68-year-old woman's health.

Stein's tweet played right into the narrative that some sects of the Republican party have been trying to float with voters: that Clinton is frail, sick, and not presidential. Then again, Newt Gingrich had a coughing fit on Tuesday on Sean Hannity's show, talking about Hillary Clinton's cough attack on Monday. Karma can be tough.

As a woman and a doctor, Stein could have been more careful about the implications of her comment. Yes, as a woman. Stein played into the Republican trap. Sometimes Trump and his supporters seem to play "the woman card" more than the female candidate does in that they can't decide whether Clinton is either too frail, too "hawkish," or just doesn't have a "presidential look" to her. It all sounds a bit like code for "female."

You don't have to love Stein or Clinton, but as a woman, it would be nice for another female candidate to acknowledge that talking about another woman's physical constitution and capability to lead hurts the feminist cause, in general. If Hillary's cough is so nefarious, there are also many conclusions one could come to while searching WebMD for Donald Trump's often erratic behavior or the fact that Jill Stein often tweets and deletes statements without seeming to think first.

Impulse control is important and, to be fair, just as worthy of discussion as a cough.

And anyway, making a cough or any health condition an issue is just mean, plain and simple. One day (hopefully), we'll have an able candidate in a wheelchair; an amputee veteran; or someone with a chronic, but manageable, illness running for office. So would it be OK to bring those conditions into question too? Coughing isn't a disability or impediment, just as the aforementioned aren't either. It's allergies and a dry, tired throat. But once you make a simple cough an issue, anything else about a candidate's health becomes fair game. That's a slippery slope voters should be careful not to approach. That a candidate is mentally healthy and doesn't have an illness that would be fatal a year or so into their term is worth knowing. Other than that, speculating about health is just a silly game to distract voters.

Stein caught her blunder, apparently sensing that mocking Clinton's health and playing into the already pretty dirty campaign rhetoric coming from all sides might not be a good way to win support for her party. There are lots of reasons to disregard comments about Clinton's cough; The most important one is that there are a lot of other things voters should be talking about.