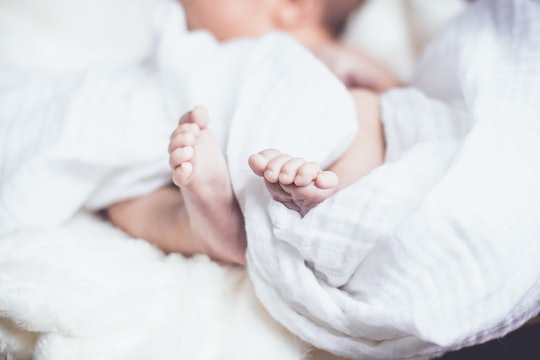 Breastfeeding can be enormously beneficial for both babies and their mothers. Nobody disputes that. But the "Breast is best" mentality that permeates our culture can actually be very dangerous in some cases. Just ask Jillian Johnson, whose son's tragic and preventable death serves as a lesson that there is no one-size-fits-all approach to feeding children, and the health care industry need to reexamine the way in which they support new mothers. In an essay for the Fed is Best Foundation, Johnson shared the story of her son, Landon, along with technical commentary by Christie del Castillo-Hegyi, M.D.

"Jarrod and I wanted what was best for Landon," Johnson began. "We took all of the classes. Bought and read all of the books." All of the classes and literature stressed the importance of breastfeeding, and Landon was born in a "Baby-Friendly" hospital, a designation that means it followed the protocol put forth by the World Health Organization and the United Nations Children’s Fund's Baby-Friendly Hospital Initiative. The stated goal of the program is to give "all mothers the information, confidence, and skills necessary to successfully initiate and continue breastfeeding their babies or feeding formula safely," but in practice, it pushes to discourage formula feeding.

The guidelines repeatedly reference breastfeeding quotas, instructs healthcare facilities to keep formula "out of view of patients and the general public," and uses insulting language such as, "human milk fed through the mother’s own breast is the normal way for human infants to be nourished."

Landon's hospital, Johnson wrote, according to the story on the Fed Is Best page, insisted on breastfeeding unless the mother had "breast augmentation or cancer or some serious medical reason as to why you couldn’t breastfeed," and required a written prescription by a pediatrician before they'd allow a baby formula. Landon was born full term, with a healthy weight and a good APGAR score, but wanted to nurse constantly. The lactation consultants assured Johnson that he was "doing fine," although one did mention that she may have trouble producing milk due to her polycystic ovarian syndrome. Incredibly, the lactation consultant reportedly recommended some herbs as a remedy. In fact, according to Dr. Castillo-Hegyi, Johnson had six separate risk factors for failed or delayed milk production.

Landon's first two days were spent doing little more than crying and nursing., Johnson wrote, "He cried unless he was on the breast and I began to nurse him continuously." The nurses told Johnson he was "cluster feeding," a term that refers to an infant's habit of feeding frequently for short intervals, say five hours, but they should not be cluster feeding for two whole days. Castillo-Hegyi elaborated that Landon nursed a total of 9.3 hours in his first 24 hours, and almost 14 hours on his second day. By the time he was 53 hours old, he'd lost nearly 10 percent of his body weight. After 64 hours, he was sent home.

According to Castillo-Hegyi, an astonishing 10 percent of healthy, full-term babies subjected to the Baby-Friendly protocol develop hypoglycemia, a condition that can lead to long-term developmental disabilities. One study showed that the condition was linked to a 50 percent decline in math and reading proficiency at age 10. She further cautioned that "Constant, unsatisfied nursing and inconsolable crying are two of the signs of newborn starvation that lead to brain-threatening complications," and so-called "cluster feeding" can actually cause a child to burn more calories than they're taking in.

Just 12 hours after Landon came home, he was found unresponsive and without a pulse, according to Fed Is Best. He was given CPR on the way to the ER, put on a ventilator, and he regained his pulse about an hour later. Landon was diagnosed with hypernatremic dehydration (a high concentration of sodium in the blood), cardiac arrest from hypovolemic shock (a condition where the liquid portion of the blood is dangerously low), and hypoxic-ischemic encephalopathy (a brain injury caused by oxygen deprivation). He was taken off life support 15 days later.

"I still have many, many days of guilt and questions," Johnson wrote. "What if I would’ve just given him a bottle? And anger because how would I have known." After the birth of her second child, Stella, she was concerned that she didn't cry much. "And it was then that I realized that it wasn’t normal for a newborn to cry as much as Landon did. He was just crying out from his hunger." Johnson doesn't want Landon's death to have been in vain.

In a email to Romper, she explained that she chose to tell his story, five years after he died, because she realized that "there could be so many more parents that needed to hear it or talk about it but were never given the opportunity. I had the opportunity to get the dialogue started and it needed to be done. I only wish I did it sooner."

Since its inception two years ago, the Fed is Best Foundation has received tens of thousands of stories from parents whose babies were inadvertently starved. The Foundation believes that "current breastfeeding guidelines have not been studied for safety," and they're adhered to "with little awareness of the caloric and fluid requirements of newborns." It warns parents that more than half of all exclusively breastfed babies lose more than the 7 percent of body weight recommended by the American Academy of Pediatrics, and urges parents to use this guide on weighing newborns. Also available to parents is a form that helps communicate their feeding goals to doctors, with the warning that nearly one-quarter of mothers experience delayed milk production, and insufficient feeding in the number one cause of newborn rehospitalization; one in 50 U.S. babies are affected every year.

The Foundation has created a petition in order to lobby the CDC, the AAP, and the Surgeon General to warn parents of the risks of underfeeding breastfed babies, so that what happened to Landon never has to happen again.