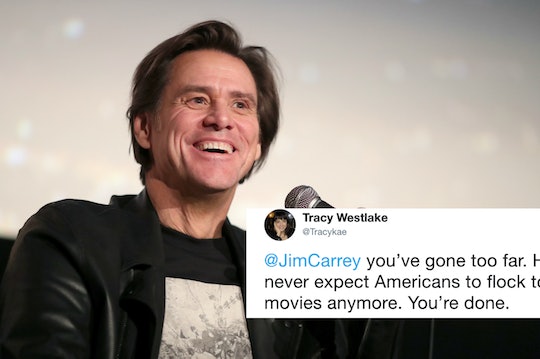 Jim Carrey is known for acting in some of your favorite films as a kid (and now adult) like The Grinch and Ace Ventura: Pet Detective and getting a reaction out of people, typically in the form of laughter. But now Carrey is getting a different kind of reaction out of people through a different medium — drawing politically inspired cartoons that get a rise out of people. You might be surprised to know that Carrey is an artist and Carrey's latest portrait of Trump's sons, Donald Jr. and Eric Trump, has some Twitter users saying that he has gone a little too far. Romper's request for comment from Donald Jr. and Eric Trump was not immediately returned.

While Carrey's Twitter bio might state "Actor Jim Carrey!," it should say is "Artist Jim Carrey." This is because Carrey has been creating a lot of art recently that he posts to Twitter almost daily. The subjects of Carrey's art varies — sometimes it's political and other times it's abstract. But even just by glancing at Carrey's Twitter account, you can tell that he has a lot to say about American politics, including president Donald Trump.

One of Carrey's most recent works of art, posted to his Twitter account on Tuesday, has some people shaking their heads. In the photo, an elephant's tusks spear through two individuals holding rifles and is an apparent commentary on people who "hunt for sport," according to Vanity Fair. But to a lot of people on Twitter, those two individuals look a lot like Trump's oldest sons, Donald Trump Jr. and Eric Trump.

Some Twitter users weren't too pleased by this image or the fact that Carrey drew it himself. "You've gone too far," one Twitter user wrote. "Hope you never expect Americans to flock to your movies anymore." While other Twitter users pointed out the hypocrisy in his photo.

Carrey's portraits like the one he posted on Tuesday are political satire. And they're really no different than any political cartoon that is in your local newspaper, according to the Telegraph. But at the same time, in spite of the political leanings of their father, Eric and Donald Jr. are just like everyone else and they're people, too. You can't blame people for getting upset about them or thinking that Carrey went a little too far with his drawing.

This isn't to say that Donald Jr. hasn't hunted elephants himself. Years ago, according to ABC News, photos of Donald Trump Jr. surfaced of him "holding the tail of a dead elephant" after going hunting in Africa. Policies were changed last year in Trump's first years of presidency that allows for Americans to "bring back the carcasses of elephants" into the United States, according to ABC News. Carrey's photo of the Trump sons could very well just be a commentary on that. Some Twitter users seem to think so and even praised Carrey for his artist expression.

This isn't the first time that Carrey's political cartoons have gotten a rise out of people. Carrey has mocked White House Press Secretary Sarah Huckabee Sanders in a photo posted to Twitter, according to the Telegraph, and has routinely posted photos of the president that a lot of his supporters haven't necessarily agreed with. Carrey's portraits have depicted Facebook founder Mark Zuckerberg and the president also in a negative light, according to Page Six. But it's clear that Carrey's art is a passion of his, according to the Daily Beast. "I think what makes someone an artist is they make models of their inner life," Carrey has said, according to the Daily Beast. "They make something come into physical being that is inspired by their emotions or their needs or what they feel their audience needs."

Whether you think Carrey's art went too far or perfectly addresses the political climate, art is what you make of it. And Carrey's art — no matter how gruesome some people may think it might be — is just as subjective.