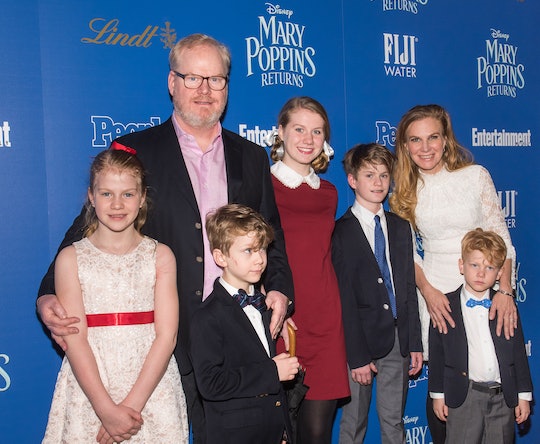 With six other specials under his belt, Jim Gaffigan premieres Amazon Prime Video's first ever special, Jim Gaffigan: Quality Time Friday, Aug. 16. Known for his family-friendly, relatable humor, Gaffigan's jokes about his kids constantly have me wheezing "So true!" between belly laughs. With a name like Quality Time, I expect this special to be filled with more way-too-accurate parent humor.

As a father to five children ranging in age from seven to 14, Gaffigan is known for using his kids' shenanigans as fodder for his standup. If you've never listened to the "Clean King of Comedy," he's among the most family friendly comedians in the world, with a hard focus on kids, marriage, life as a father of five, and other general observations most people are thinking but don't say out loud. For instance, in the trailer for Quality Time, he discusses turning down birthday party invitations by saying "completely available, just not interested." Truer words have never been spoken.

The trailer also touches on people who say "you should never lie to your kids," to which Gaffigan says, "those people don't have kids." Those small snippets give a clear picture of how Gaffigan approaches standup with brutal honesty.

But these aren't his only jokes about being a dad. Another one of his most famous (and hysterical) observations on having children: "Parenting is a cult. And as a cult member, you can try to explain it to other people, but we just appear like lunatics." He's also mused, "Raising kids may be a thankless job with ridiculous hours, but at least the pay sucks," per HuffPo.

In a previous standup special, Noble Ape, Gaffigan touched on the complexity of trying to spend quality time with each of his kids. In a clip posted on Twitter last summer, he said, "I have five kids. I used to have more, but I ate them." He went on to add (a little more seriously), “I try to do one-on-one time with each of my kids but it’s hard because I travel and there’s a lot of them. So sometimes that special daddy and me time is just doing something mundane like going with me to the post office."

With the painfully hilarious statement on Twitter like,"The hardest part of parenting is when I’m with my kids," I'd expect nothing less in Gaffigan's standup.

In Noble Ape, Gaffigan also addressed his wife and frequent co-collaborator, Jeannie's brain tumor head on. And it was actually... funny. "Any comedian has the approach that they can make anything kind of funny," Gaffigan previously told USA Today in regards to making his comedy personal. "I’m not talking about wanting to take a nap or my insatiable appetite, but that’s tied into how I dealt with this family medical crisis."

If you're looking for more kid-related comedy (and more) from Gaffigan, clear your schedule. Quality Time is available to stream exclusively through Amazon Prime Video. So if you're not a member, get on it. Whether you have kids or not, Quality Time will give you a glimpse into the (hilarious) life of someone who gets it, and is suitable enough for the whole family to watch.