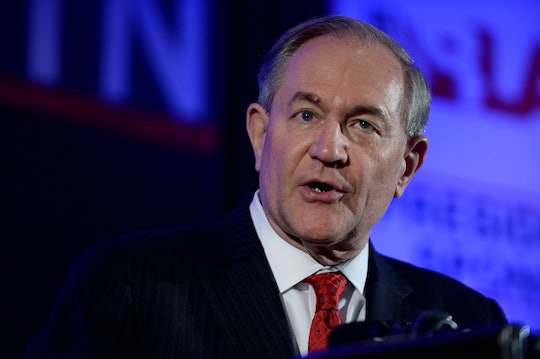 Jim Gilmore Actually Won The Iowa Caucus, At Least According To Twitter

As any political junkie will attest, running a successful campaign is all about managing expectations. Whether a candidate wins or loses all depends on, well, how you define a win or a loss. While others were watching the nail-biter between Republican candidates Texas Sen. Ted Cruz, billionaire Donald Trump, and Sen. Marco Rubio, Twitter users watched former Virginia Gov. Jim Gilmore inch along in the polls and gave us all the reasons why Jim Gilmore actually won the Iowa Caucus.

The biggest reason had to be that Gilmore kept chugging along after an abysmal showing by caucus goers. USA Today reported that as of 9:55 p.m. local time, with nearly a quarter of precincts reporting, Gilmore had managed to snag just 10 supporters. No, Gilmore didn’t earn 10 percent of voters, he earned 10 actual votes. If that isn’t sad enough, USA Today also pointed out that 82 Republican caucus goers voted for “Others,” the category reserved for any candidate not officially in the race.

Whether Gilmore will stay in the race after Iowa is an open question. But on Tuesday night, using the hashtag #Gilmentum, Twitter gave Gilmore more attention than the GOP candidate has seen at any point in his presidential bid.

Gilmore's campaign is like the political machine that couldn't, even though it really wanted to.