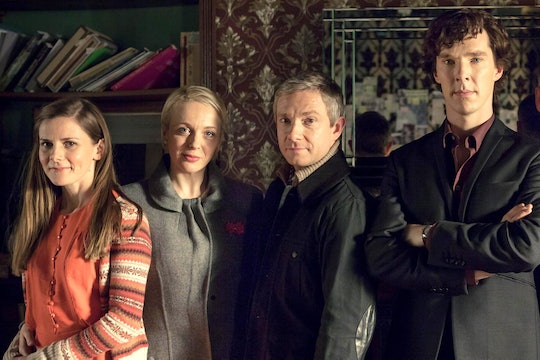 Warning: spoilers from Sherlock Season 4's finale ahead! Well, well, well... just when you think this series couldn't possibly throw anymore twists and turns at us than it has already this season, we get another surprise visit from the show's most beloved villain, Mr. Jim Moriarty. Granted, it wasn't in the present-day tense like many of us had hoped — some were still holding out hope that the infamous villain was alive — but alas, this was not the case, I'm afraid. However, Jim Moriarty did return to Sherlock Season 4 in the form of a flashback that proved to be very important to the overall storyline.

Despite all of Mycroft's constant bragging about being the smartest Holmes brother, he definitely made a big mistake when it came to his sister, Eurus. Not only did he keep her existence from Sherlock and their parents (the latter of which thought she was dead), but he allowed her to have gifts on occasion, one of which included having a private five-minute conversation with Moriarty himself. I mean, I'm not great detective or anything, but even I could've deduced that this wouldn't be a very good idea. These are the two most devious minds on the show, so obviously, it only led to mayhem and destruction.

As Sherlock later discovers, it only took Moriarty and Eurus five minutes to come up with this elaborate game they were now playing out at Sherrinford, which is pretty impressive, even for them. So knowing that Moriarty may not be around to see this all get played out, he proceeded to record little video clips that taunted Sherlock throughout the duration of the episode. Whether it was in the form of a fake clock ticking or just general mocking, Moriarty played the part in the way only he could and made the experience all the more gratifying (well, for viewers anyway).

So while it was too bad we didn't get to see yet another character from the show rise from the dead, it was definitely still a very welcome guest appearance. But that's one of the brilliant things about a show like Sherlock. Even if you die, they can always find a clever way to bring you back that is not only enjoyable, but adds a whole other level of greatness to the episode. I think it's safe to say that Moriarty is definitely no longer in the land of the living, but the fact that he's able to live on in this capacity takes some of the bitterness of that realization away. He may be gone, but that doesn't mean he can't still mess with Sherlock Holmes every now and then.