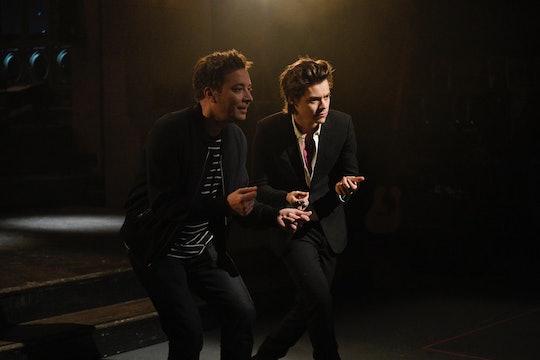 It's always fun to watch Jimmy on Saturday Night Live, since he always looks like he's having such a good time. For his opening monologue, Jimmy Fallon performed David Bowie's "Let's Dance" and it looked like the best party ever. Fallon started off his monologue reminding viewers that this was the first time in SNL history that the show has been aired live, coast to coast. So for the first time, people in California could actually watch the show totally live. Maybe it was in the name of having the highly anticipated musical guest, Harry Styles, perform his first solo single.

And to commemorate it, Fallon and Styles broke out into a full on version of Bowie's iconic song "Let's Dance." It was a good choice for a Saturday night. Fallon's pretty musical, so he did a killer job singing along and leading a troupe of ah-mazing dancers through the NBC studios. It was very, very on point. Even better, Nile Rodgers was on guitar for the song. In case you're not a musical buff — Rodgers produced the song for Bowie and it was one of the first lighthearted, party songs that Bowie did. Oh, the circle of time on SNL.

Whatever you think of Fallon, you can't deny that the guy knows how to have a good time. And musical numbers are sort of his jam. In fact, he was singing and dancing throughout the whole show. In a later sketch, Fallon came to a girl named Jen's house (played by Cecily Strong) to win her back. He broke into Savage Garden's "Truly Madly Deeply" in an all-white suit. Like I said, he can't not do music numbers in pretty much every skit he's part of.

Before that even, the SNL writers put Fallon to work in a Family Feud sketch, which pitted stars from the '70s and stars from the present. Fallon played both John Travolta's, running back and forth and somehow changing his costumes and wigs each time. It was incredible. Luckily, Fallon actually kept it together for most of the sketch, just breaking with a few smirks here and there. For a guy best known for breaking down into hysterics on live television, he was on it this weekend. For what it's worth, Harry Styles played Mick Jagger in that sketch and also managed to steal the show.

But even with some of the tougher scenes and heavier jokes, Fallon's opening dance to Bowie seemed to set the show up for success Saturday. You can never go wrong with Bowie.