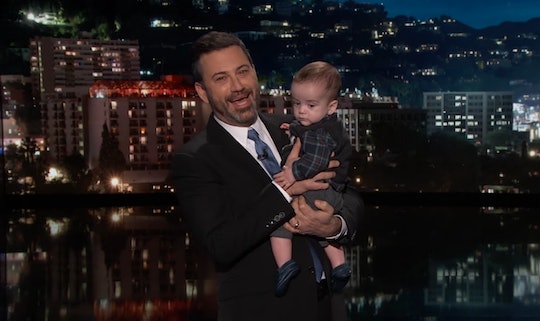 In today's sharply divided political landscape, some of the laws and programs in upheaval may seem somewhat abstract to the average voter, but a late night talk show host has found a way to put a real human face on one of them. On Monday night, Jimmy Kimmel brought his son Billy on his show to illustrate to viewers who stands to lose if Congress doesn't fund CHIP, the Children's Health Insurance Program that's run out of funding thanks to partisan bickering over the Republican tax plan that mostly benefits wealthy people.

Billy, who was born in April, suffers from a heart defect that requires multiple surgeries to correct. He underwent the first when he was just days old, and his second successful surgery was completed last week. "He has one more surgery," Kimmel told his audience. "They say he'll probably on track to win at least a bronze medal in the Olympics in 2036." But millions of kids just like Billy are in serious danger, because without CHIP, their parents won't be able to afford lifesaving treatment. "What could be more disgusting than putting a tax cut that mostly goes to rich people ahead of the lives of children?" Kimmel asked, getting visibly choked up as he pleaded with voters to call their representatives.

Many people might not be familiar with CHIP, but according to Kimmel, it "covers around 9 million American kids whose parents make too much money to qualify for Medicaid, but don't have access to affordable coverage through their jobs, which means it almost certainly covers children you know." According to the U.S. Census Bureau, 15 percent of American children were uninsured in 1997, the year that CHIP was first authorized. By 2016, according to the Kaiser Family Foundation, the rate of uninsured kids had dropped to just 5 percent.

CHIP has always had bipartisan support, and Kimmel pointed out that the last time it was authorized, in 2015, it passed in the Senate by a vote of 92 to 8 (here are the eight cartoon villains who voted against it, in case you'd like to keep that in mind when they're up for reelection). But this year, Kimmel said, "they let the money for it expire while they work on getting tax cuts for their millionaire and billionaire donors." CHIP may not be a priority for Congress, as Kimmel noted, it's "literally a life and death program" for 2 million children with chronic health problems. "Imagine getting that letter literally not knowing how you'll be able to save your child's life," he asked his audience. That's about to become reality next month.

"If these were potato chips they were taking away from us, we would be marching on Washington with pitchforks and spears right now," Kimmel joked, one of the few moments of levity in his emotional monologue. But it's not over yet. "So, once again, I'm asking you, Billy's asking you, to make two phone calls you shouldn't have to make. Jam the House and Senate phones tonight, tomorrow, as long as it takes. Tell them to take a break from tax cuts for a minute and fully fund CHIP immediately." You can find your Senators phone numbers here, and contact information for the House of Representatives can be found here. If you don't know who your Representative is, enter your address on this site to find out.

Kimmel also closed by reminding viewers that the deadline to enroll in Affordable Care Act plans is just days away. "In spite of President Trump's efforts to sweep it under his rug, Obamacare is not dead," he said, and if you're uninsured, you'll be subjected to hundreds of dollars in tax penalties. Go to HealthCare.gov to enroll or renew your plan by Friday, Dec. 15, and don't forget to make those calls to get CHIP funded again. Regardless of how you feel about the tax plan, children's lives shouldn't hang in the balance while we figure it out.