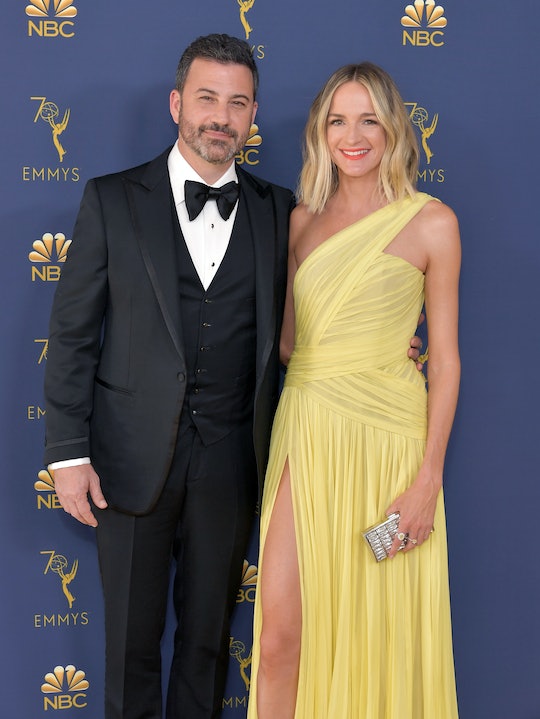 The host of Jimmy Kimmel Live! has always been pretty open with the public about his 1-year-old son's rare heart condition, a medical issue that required two major surgeries. And this week, Jimmy Kimmel revealed how he'll explain the surgery scars to his son one day when he inevitably asks about them.

Shortly after Kimmel and his wife, Molly McNearney, welcomed their son Billy into the world in April 2017, they received some difficult news. Doctors determined Billy has tetralogy of Fallot with pulmonary atresia, "a condition that occurs in one out of every 2,000 babies," according to Scientific American.

Although Billy's medical problem is a bit difficult to explain in layman terms, it affects the structure of the heart and it disrupts blood flow throughout the body. Since the lungs are often affected by this condition, many babies born with it exhibit a bluish tint to their skin due to poor oxygen circulation, according to Kid's Health. Billy had this troubling coloration after birth, a symptom that led doctors to their diagnosis, according to The Washington Post.

Of course, Kimmel and McNearney were worried about Billy's dangerous medical issue, and they went as far as to hold back some important emotions to get through their ordeal.

“There were secrets we kept from each other that we revealed only after the second surgery," Kimmel said in an interview for O, The Oprah Magazine‘s April issue, according to People. "The biggest one was that, I think subconsciously, we didn’t want to get too close to the baby because we didn’t know what was going to happen."

Luckily for Billy and his parents, however, the surgeries were a success. And now that the hard part is over, Kimmel is focused on Billy's future, especially where it concerns his surgery scars.

As any parent of a child with medical issues knows, it can be difficult to come up with a kid-friendly explanation of surgery. But when you're someone like Kimmel — a guy who has a knack for creativity and levity — the task isn't too overwhelming.

"We’re going to tell him he was attacked by a monster,” Kimmel joked to Us Weekly when asked about what he'll say when Billy inevitability asks about those surgery scars.

Pretty creative, right? You got to give Kimmel props for utilizing Billy's imagination to "explain" a potentially tough subject.

That all being said, I'm sure there will come a day when Kimmel and McNearney will have to sit Billy down to explain the real story behind his surgery scars.

The comforting thing? There are a lot of resources out there for parents who need help explaining surgery scars to their children.

For instance, in a BabyCenter forum discussion started by a mom worried about her child's surgery scar, a parent of a 4-year-old shared that she "simply says it is where the doctors fixed her heart." The parent, who shared that she has a "a large scar the length of [her] forearm from surgery" from childhood, said that her parents were "very matter of fact" about her own medical history, so she intends to take the same approach with her child. "I want her to know what it was, and to not be ashamed of it. The best way I know to do that is to talk about it," the parent shared on BabyCenter.

One person even recommended a book called Zip Line by David Humpherys about heart surgery scars. "It is super cute and a great message!" they wrote on BabyCenter

Each kid is different when it comes to the topic of surgery and scars, but I'm confident Kimmel and McNearney will have no trouble explaining things to Billy one day — even if it involves a monster or two.