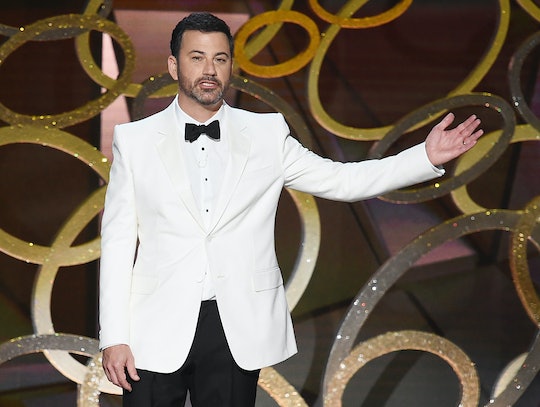 Jimmy Kimmel Shares An Adorable Photo Of His Son

In May, late night talk show host Jimmy Kimmel took a break from cracking jokes and got real with his audience. During his opening monologue, Kimmel revealed that his infant son, Billy, had to have open heart surgery, and that the life-saving health care Billy received is something that every kid deserves access to. Two months later and Jimmy Kimmel has shared his first photo of his son since that monologue. He said his son is "doing better," which is awesome. But with the current state of health care reform, it is unclear what the future could hold for families not as fortunate as Kimmel's.

Kimmel took to Twitter on Friday to share a photo of Billy, now 3 months old, with fans and update them on his status for the first time since that tearful monologue in May. In the monologue, Kimmel told the audience that Billy was born with a heart defect and three days after his birth, underwent open heart surgery to fix one of the two defects in his heart.

Billy is, thankfully, doing better according to Kimmel, and in the new photo, Billy looks absolutely adorable with his big gummy smile. "Billy is 3 months old and doing great," Kimmel wrote in the tweet. "Thanks for the love and support. Remind your Congresspeople that every kid deserves the care he got."

Kimmel's wife, Molly McNearny, shared a different photo of Billy on Friday night, where he has just as big of a smile on his face. This baby could not look any happier after all of the things he has been through during his three short months of life. "Billy's looking out for a lot of his buddies at Children's Hospital. Remind your congresspeople to protect them."

While these photos of Billy are absolutely adorable, they shouldn't serve as a distraction from the incredibly important matter at hand. The current state of health care is in jeopardy, and if the Affordable Care Act, also known as Obamacare, were to be repealed, infants like Billy might not be able to get the treatment they deserve. Kimmel cited Obamacare as the one thing to help so many babies, like Billy, during his monologue in May (and got a shoutout from President Obama in return). Kimmel said, according to the monologue:

The sad reality is, with a potential repeal of Obamacare, Republicans are wanting to take away from families that aren't as well off as Kimmel's. If Trumpcare were to pass and a baby were to need open heart surgery right after their birth along with additional surgeries in the following years, they could easily max out their lifetime limit within the first months of their life. Their lifetime limit is a cost limit set by insurance policies that states a max limit the insurance company will cover during the time a person is under that plan. If a child goes over that set cost limit early on, then that child could be stuck paying for the cost of their preexisting condition for the rest of their life, out of pocket. Parents who are dependent on Medicaid and give birth to a baby with a preexisting condition could see major cuts to their family's care. Insurance premiums would also rise if Obamacare were to be repealed, making insurance for the whole family costly. Expensive procedures, such as new medical treatments can drive up the cost of premiums, according to ABC News.

Kimmel and McNearny's tweets make an incredibly important point. Obamacare has yet to be repealed and senators are listening to their constituents. Remind them how important low-cost health insurance is — not only for you, but for infants like Billy as well.