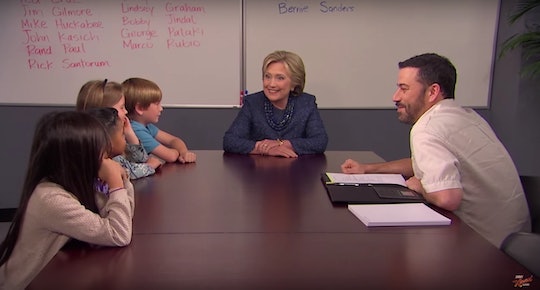 Hillary Clinton may very well be our first woman president, but what do our kids think? To find out, late night host Jimmy Kimmel joined Clinton to talk politics with kids, asking four pint-sized, future voters what they thought about a woman finally running this country. In the segment, which aired Thursday on Jimmy Kimmel Live, it looks like both Kimmel and Clinton got a kick out of some of the kids'... rather controversial (and hilarious) responses.

The segment started off with Kimmel speaking with two boys and two girls, and asking them about their views on a female prez. The first responses? A little disappointing: "They're too girly. . . They'll make, like, girl rules. … Free makeup in the world," said one boy, when Kimmel asked about what a female president would do. "They'll decorate the White House and make it all girly. They might even make it pink," another said. (Ugh, come on kid.)

But while the two boys interviewed may not have thought women were the smarter sex, the girls were adamant that just the opposite is true. In fact, both girls said they were more than ready for a woman president. "If there is a war, she would probably make it stop so people could be more healthy and they won't die," replied one adorable (and well-spoken) little girl.

Still, the boys remained unsold on the idea through much of the segment, which is when Kimmel decided to bring out a little guest — and introduced them all to none other than Democratic hopeful Hillary Clinton, aka The Hillz. "You have a very unique opportunity right now because you get to ask someone who could very well be our next president for something," said Kimmel. "What would you like Ms. Clinton to do if she becomes president?"

Their responses didn't disappoint: "Free food in restaurants," one girl said.  "No school at all," replied one boy. "These kids want handouts," Kimmel retorted. (But honestly — that kind of America does sound like a kids' dream.)

Check out the full clip below:

While it doesn't look like Clinton will be taking any of the kids' hilarious suggestions with her if she becomes the first Madame President one day, it's heartwarming to see young girls speak so confidently about their beliefs in women's abilities — especially when we're talking about one of us becoming the leader of of the free world some day.

More Like This
Solange Knowles Is Making History In The New York City Ballet
Kristin Bell Shared Some Sweet, Rare Photos Of Her Daughters From A Family Vacation
What Parents Need To Know About Marvel's New She-Hulk Series Coming To Disney+
Netflix Reveals The Official Teaser Trailer for Wednesday