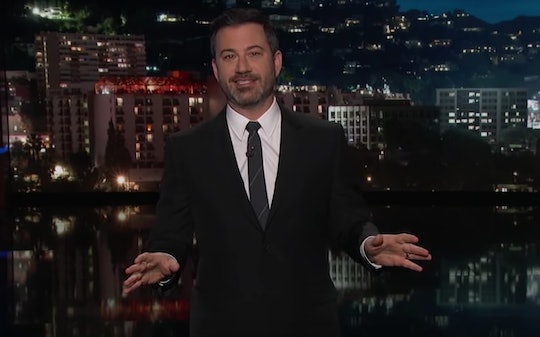 Elf on the Shelf is one of those holiday traditions parents either love or hate. The elf that sits on the shelf and reports to Santa each night has become a staple in households across the nation, but the holiday tradition requires a lot of creativity and time. That's why Jimmy Kimmel's Elf on the Shelf hack will resonate with busy parents everywhere: it requires almost no effort at all.

Over the years, Elf on the Shelf has become a fun tradition for families. Every day of December, leading up until Christmas, the Elf is supposed to keep a watch on families, returning to the North Pole each night to tell Santa about all the nice things kids have done. And each morning, the Elf returns (in a different spot every time) to continue the watch. As you'd assume, that requires a lot of thought and commitment from already busy and exhausted moms and dads.

During a recent episode of his show, Jimmy Kimmel Live!, Kimmel explained that Elf on the Shelf has worked wonders in his home when it comes to his 4-year-old daughter, Jane, and 1-year-old son, Billy, with wife Molly McNearny, according to TODAY. "When that elf is in the room, I don't know who that kid is," Kimmel said of Jane. "She is an angel."

But, Kimmel admitted that the Elf requires a lot of work — he even had to set an alarm once his kids went to bed so he could move the Elf into a new place. And now, he's all out of new places, even if it's just the first week of December. "We're all out of shelves to put him on," Kimmel explained. "Last night I stuffed him in a tissue box."

A lot of parents can probably relate to this struggle...

Because of this, Kimmel has developed the ultimate "hack" to solving his problem: attaching his Elf on the Shelf to his robotic vacuum.

"Tonight I'm going to duct tape the elf to a Roomba and let it move around itself," Kimmel said.

That idea is pretty hilarious and kind of genius. Since the robotic vacuum is always on the move, it could motivate kids to do nice things in every part of the house, because there's no telling where the vacuum (and the Elf) might show up.

Let's be real, coming up with new and inventive placements for Elf on the Shelf is hard, especially since some parents are so amazing at coming up with new placements for their Elf. But some parents just don't have the time to put together these set ups, especially after a long day of work and putting the kids to bed. This is where super simple ideas for Elf on the Shelf come in to play — or Kimmel's idea for a new business.

"There needs to be a service that comes to your house and moves around the elf for you," Kimmel said during his monologue. Now this is a fantastic idea. There isn't a price on keeping kids happy during the holidays, so why not have someone help out with Elf on the Shelf if that means looking forward to well-behaved kids for the next 20 days.

But it's OK for parents to want to quit doing Elf on the Shelf altogether. Some people believe that the Elf's "always watching" mentality is harmful to kids and their behavior, according to PopSugar. While other people believe that the Elf is just creepy, as noted by Fatherly. But on the other hand, some moms love doing something special each day for their kids with the Elf on the Shelf, according to TODAY, and like Kimmel said, his daughter is on her best behavior because of the Elf's presence.

No matter your thoughts on Elf on the Shelf, you have to admit that Kimmel's hack is pretty clever. So don't be surprised to see the Elf on the Shelf riding a robotic vacuum on your Facebook feed sometime soon.