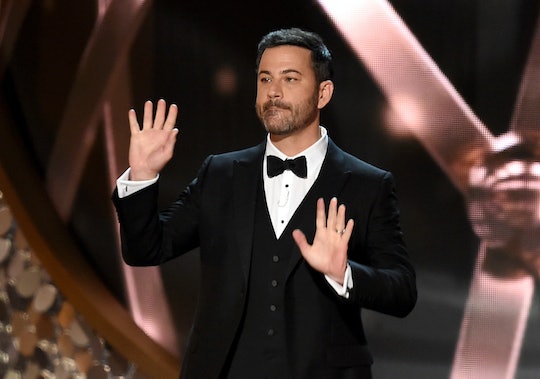 Late-night TV host Jimmy Kimmel has always had an amazing ability to combine family-oriented — though not necessarily family-friendly — humor with a streak of well-placed and targeted social commentary, and he didn't disappoint at the Emmys. In fact, Jimmy Kimmel's EpiPen joke at the 2016 Emmys was much appreciated by viewers who have been enraged by the recent price hikes for the life-saving medicine.

Kimmel's astute comment came during a generally awesome segment in which Kimmel's mom (that's right, like his actual mom) made peanut-butter-and-jelly sandwiches for the Emmys' audience. There were 7,000 sandwiches to go around, according to Kimmel, and the child actors from the hit Netflix horror series Stranger Things came out on bicycles to pass them out. Kimmel helped out, too, carrying cute little brown bags from actor to actor.

"Oh, by the way, I should ask... raise your hand if you have a gluten allergy," Kimmel said. This was a set-up for a joke, of course, because he explained that he wanted America to see "which of their favorite celebrities are the most annoying." At this juncture, though, Kimmel turned a bit more serious. "Also, if you’re allergic to peanuts, uh, well... I guess this is goodbye, because we can only afford one EpiPen."

Not only was this joke incredibly well-timed, but it was also well-received by the audience. Kimmel had clearly hit a nerve. The recent EpiPen price increases instigated by Mylan, the pharmaceutical company that manufactures the EpiPen, is pretty much a universally abhorred move. It's also consistently been in the headlines, because the saga of how to lower the EpiPen's prices — and how to hold Mylan accountable — has been ongoing.

According to The New York Times, the solution to the EpiPen problem is theoretically simple: the allergy treatment could be added to the federal list of preventive medical services, a category of health services that most health plans must legally cover without out-of-pocket costs. According to The Times, the idea is particularly brilliant because Mylan itself would benefit from the move: they could still charge outlandishly high prices, but prices would shift from the consumer to the tax payer.

Perhaps that's just kicking the ball down the court, but considering that the price for a two-pack of EpiPens is currently $608, it's clear that something has to change, and fast. EpiPens are nonnegotiable for children (and adults) living with severe allergies, and the sky-rocketing cost has made it difficult for parents and loved ones to access the emergency care they need. The EpiPen contains portable doses of epinephrine, a hormone that can save the life of someone experiencing a severe allergic reaction or anaphylaxis.

Whatever the outcome of the ongoing EpiPen saga, I'm sure glad that Kimmel brought it up tonight. Health care jokes aren't exactly typical fodder for awards shows, but this particular joke sure landed.