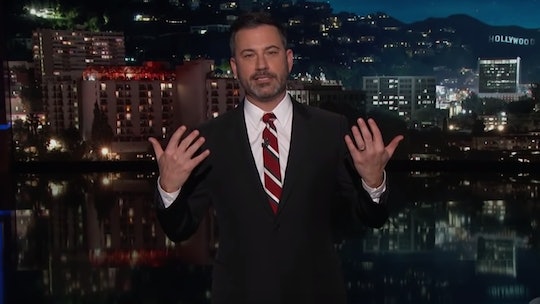 Remember Jimmy Kimmel's infamous Halloween candy prank? For several years now, the late night talkshow host has challenged parents to tell their kids that they've eaten all of their Trick-or-Treat candy — and then share their reactions. (Of course, parents hadn't actually gorged themselves on all of the bite-sized candies.) Although the prank was borderline cold-hearted, kids' reactions have been pretty darn amusing through the years. Well recently, the talkshow host tasked moms and dads with another YouTube challenge. And Jimmy Kimmel's latest parents prank involves turning off the TV while kids are playing Fortnite.

As Huffpost reported, the late night host initiated the prank last week on Jimmy Kimmel Live. "Monday night on the show, I issued a new YouTube challenge," Kimmel said. "And the challenge was I'd like you to sneak up on your kids while they're playing Fortnite — kids are nuts for this Fortnite — and turn off the TV. I asked, and many of you answered and with that said, here are the results of 'Hey Jimmy Kimmel, I turned off the TV during Fortnite.'"

Spoiler alert: It didn't go over well. Basically, what followed was a collage of teens and pre-teens completely flipping out when their TV screen goes dark in the middle of playing the game of the year. As Time reported, the nearly 3 minutes of submitted video footage showed tantrums, screaming, and even one kid smacking the recording device out of his parent's hand.

“What are you doing, go cook!” one kid yelled at his dad.

“What do you want!” another cried. “Are you out of your mind?”

My personal favorite was the mom standing in front of the TV trying — and failing — to locate the power button. Although she never actually succeeded in turning off the game, she still managed to prevent her kid from seeing anything on the screen with her own body. “What are you doing?" her son yelled. "My friend just died because of you!”

Even though it was bleeped out, one kid obviously exclaimed, "What the f*ck!"

And this kid's face? Priceless.

"Thanks, everyone," Kimmel said at the conclusion of the viewer submissions. "Now go outside." LOL. To be honest, though, part of me wants to laugh — and the other part of me is shaking my head, going, "Guys, it's just a game." But it's not just any game, I have to remind myself: It's Fortnite, after all.

Although my kids haven't yet discovered the highly-addictive game, it has become a pop culture phenomenon within the past couple of years. Basically, 100 players are dropped onto an island (they can play as an individual or in teams of four players) and the last person/team remaining wins. So you run around gathering weapons, strategizing, and shooting/blowing up opponents — except the the graphics are very cartoon-y and there's not any vivi blood or gore because players basically just disappear after the die. (Which is probably why there so many younger players.) Something else that has made the game wildly popular? Skins (costumes) that players can buy, along with dance moves they can bust upon killing an opponent.

Clearly, players are extremely invested in Fortnite. So unless you want to see your kid devolve into a tantrum-ing pile of pathetic, I wouldn't advise trying this at home. Still, it's pretty entertaining watching other people's kids flip out, isn't it?