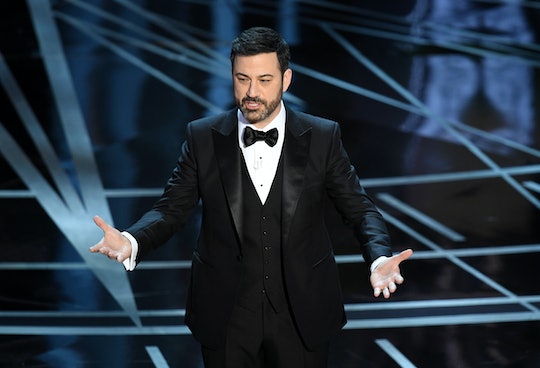 The Jimmy Kimmel Oscar Joke That Upset Some People

As a comedian and host of Jimmy Kimmel Live!, Jimmy Kimmel has made a career out of making people laugh. But some of the jokes he made as host of the 2017 Oscars rubbed viewers the wrong way. In particular, Jimmy Kimmel's spanx joke at the Oscars was proved to be anything but funny.

Early on in the night, Kimmel pulled a stunt at the awards show that involved a bunch of candy dropping from the ceiling onto the celebrity-filled audience below. Slowly and carefully, of course, so as not to beam someone like Meryl Streep in the head with confectionary. Because while that would certainly draw more attention to the Academy Awards, it's not exactly the sort of publicity Kimmel is likely looking for in regards to his hosting gig.

But when the candy came down, Kimmel made a classless joke that is, in fact, getting him some publicity, and not the good kind. As the treats rained down on celebrities, Kimmel joked that it was "time to find out how well those spanx really work." Yikes. And it's probably a safe bet that he meant to direct that zinger at the ladies in the audience, not the men.

It should be noted that this was not the first joke Kimmel made at the expense of someone because of their weight during his Oscars-hosting role. He also made a joke during his opening monologue about being "the fat one" when he first met Matt Damon, implying that Damon is now the fat one in their friendship. Not exactly a great record for Kimmel for the night.

It's very uncool for Kimmel to make jokes like this, especially since the industry being honored already presents women with unrealistic beauty standards. Kimmel could have made many jokes without fat-shaming — but he chose to go that route. That's disappointing, and should be called out.

So how did viewers watching and reacting on social media respond to Kimmel's crack about Spanx at the Oscars? Well, they weren't exactly pleased.

Apparently viewers at home are not exactly feeling the love for Kimmel's fat-shaming comments on their screens. Kimmel can and should make better, smarter jokes during one of the biggest hosting gigs.

Isn't there enough material about the current political climate, or about Hollywood itself, that he could make instead? Why are fat jokes Kimmel's go-to joke choice? It's discouraging, to say the least, and hopefully he doesn't revert to them as the night goes on.