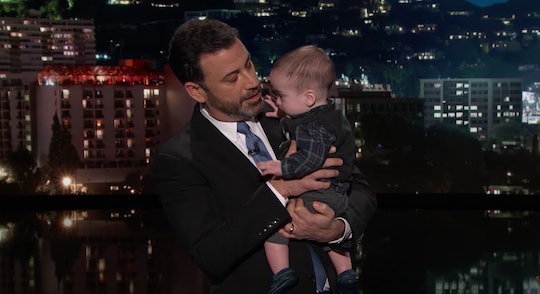 It's no secret the past year has been a rollercoaster ride of highs and lows for Jimmy Kimmel and his wife, Molly McNearney. That's because one year ago on Saturday, the couple welcomed their second child — a baby boy they named Billy. Following his birth, their joy quickly turned to fear when it was discovered Billy had a congenital heart defect that required surgery. Over the past 12 months, the late night talk show host has opened up about his son's journey, and was often moved to tears while talking about his health struggles. Today, Jimmy Kimmel's tribute for his son Billy's birthday will make you cry — and then vote.

The Jimmy Kimmel Live! host took to social media on Saturday, April 21 to mark the occasion — complete with an adorable photo of the birthday boy sporting a festive hat and bow tie while clearly enjoying his ice cream. Along with this sweet snap, Kimmel took a moment to reflect on the past year, People reported. "A yr ago today, God gave us this tough little boy," he wrote. "Today, we thank the nurses & doctors at @CedarsSinai & @ChildrensLA who saved his life & those who shared thoughts & prayers. We cannot stay quiet. Please wish Billy happy birthday by REGISTERING TO VOTE! vote.gov."

To get the full effect of Kimmel's birthday tribute, however, it's important to have a decent grasp of the backstory. In May 2017, Kimmel revealed his newborn son, William "Billy" had a congenital heart defect in a moving monologue he delivered on Jimmy Kimmel Live!, People reported. Kimmel explained — often through tears — that McNearney delivered their baby boy on April 21. Not long afterward, a nurse detected a heart murmur and noticed that something was definitely "off" with the newborn's coloring. Ultimately, the new parents were told that Billy was born with a heart disease called tetralogy of fallot with pulmonary atresia. Kimmel explained:

The pulmonary valve was completely blocked and he has a hole in the wall between the left and right sides of his heart.

At only 3 days old, Billy ended up having surgery to repair the blocked pulmonary valve in his heart.

During his monologue, Kimmel also took the opportunity to address the health care debate that was going on in the United States. "If your baby is going to die and it doesn't have to, it shouldn't matter how much money you make," Kimmel said, as HuffPost reported. "I think that's something that whether you're a Republican or a Democrat or something else... we all agree on that right?" He continued:

No parent should ever have to decide if they can afford to save their child's life. It just shouldn't happen.

In December, Kimmel brought his then 8-month-old onto Jimmy Kimmel Live! to give viewers an update following Billy's second heart surgery. "Billy is doing great, by the way. He has one more surgery," Kimmel said, reported USA Today. "They say he’s probably on track to win at least a bronze medal in the Olympics in 2036."

Unsurprisingly, Kimmel once again found himself at the center of the healthcare debate. While holding his son, the late night brought up the fact that Congress had failed to approve funding for the Children's Health Insurance Program (CHIP,) for the first time since it was created. "This is literally a life-and-death program for kids. It's always had bi-partisan support," Kimmel explained. "But this year, they let the money for it expire while they work on getting tax cuts for their millionaire and billionaire donors." He continued:

I don't know what could be more disgusting than putting a tax cut, that mostly goes to rich people, ahead of the lives of children.

(For the record, Senate leaders announced in February that CHIP would be fully funded for the next 10 years, Vox reported.)

Since Billy's debut on Jimmy Kimmel Live!, the proud father has kept fans periodically updated on his little heart warrior via social media.

Personally, I think it's incredible that Jimmy Kimmel has used his son's congenital heart condition to remind viewers what's actually at stake with some of these Congressional debates. No child should be denied health insurance because of a pre-existing condition. Renewing funding for CHIP should have been a no-brainer to begin with. These decisions have real consequences. It's up to us to let our representatives know what their priorities should be. And if they don't listen? Then it's up to us to vote them out.