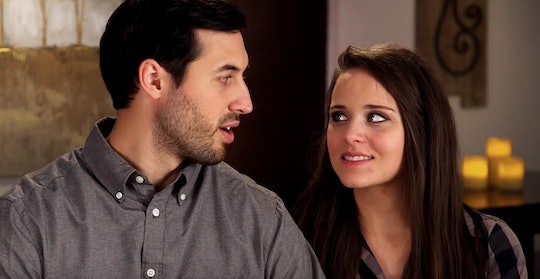 If there's anything that's synonymous with the family name Duggar, it's childbirth and tradition. Interestingly, those two topics intersect as one of the family's eldest daughters explains why she chose to deliver her first child in a setting that made her most comfortable. In a new exclusive clip from an upcoming episode of Counting On, Jinger Duggar explains why she didn't have a home birth with Felicity, despite her family's tradition.

In a new clip from the show, as People reported, Duggar explains why she felt a birth center was the right move for her. “My mom and quite a few of my sisters have done home births and for me, I don’t feel comfortable with it. I think I feel safer being in a birth center where they have a lot more things that you would need for care and also being closer to a really good hospital,” she said.

Duggar's husband, Jeremy Vuolo, added: “One of the factors for why we chose a birthing center — and specifically the one we chose — is because it is literally a minute away from multiple hospitals: a children’s hospital and two others. And so if there’s any complication whatsoever, we’ve pretty much got immediate care.”

On July 19, the couple welcomed their first daughter, Felicity Nicole Vuolo, according to their website. She was born at 4:37 in the morning weighing 8 lbs. and 3 oz. and measuring 19.5 inches long.

Duggar shared on their family website: “It’s incredible being first-time parents. It’s something that you think about and dream about, but when it’s actually here, I think the reality hits you and it’s just the sweetest thing in the whole world.”

Though there is no definitive family rule that a woman must deliver at home, it does seem to be enough of a pattern with many of the older kids that one could even call a tradition. However, Radar Online reported that even Michelle, the family matriarch, has had various birthing situations for each of her 20 kids. “A lot of people think, they ask Michelle ‘It must be easy for you to have all these children, you must be a baby machine!’ but really she’s had a lot of different kinds of deliveries,” Jim Bob said.

She may have been the first, but Michelle was far from the last Duggar woman to have an unexpected delivery.

People reported that, after 20 hours of labor with her son Israel, Jill Duggar discovered meconium being discharged. (Meconium is waste from an unborn infant, and is "often a sign of fetal distress.") From that point, Jill decided to admit herself to the hospital and delivered her son there. Something similar happened with Jessa's first birth, People also reported. Though she planned a home birth, she was admitted to the hospital for excessive bleeding.

“Labor is hard," Jessa said of the experience, according to People. "It was very intense, very long. Everything was different than I expected. I said, ‘That’s it! I’m done! I am going to the hospital and I’m going to get an epidural.’ They asked me if I really wanted to do that and I said, ‘No, I don’t, but I do.’ I wanted to try natural if at all possible.”

She continued: “I had dreamed about those first moments, getting to breastfeed right away, all that — and so when I had to go to the hospital, it was a shock."

It all just goes to show that there's no one right way to deliver a baby, and that when it comes to childbirth, it's a safe bet to expect the unexpected. What matters most is that mother and child are both healthy and comfortable, and doing what feels most right for them.