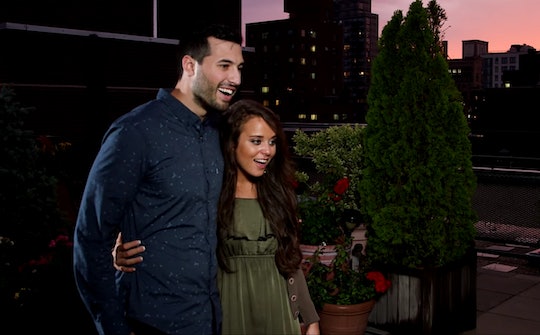 A Look Back At Jinger Duggar & Jeremy Vuolo's Courtship Timeline

As Jinger Duggar and Jeremy Vuolo prepare to welcome their first baby, it's hard to believe they began courting just two years ago. Like most Duggar courtships, Jinger and Jeremy's was short, and resulted in an engagement just a few weeks later. So, as fans eagerly await the couple's "Our baby is finally here!" announcement, now seems like the perfect time to reminisce over Jinger Duggar and Jeremy Vuolo's courtship timeline.

Jinger and Jeremy first met in 2015, thanks to Jinger's sister Jessa and her husband Ben Seewald. "I met Ben and Jessa Seewald through an interesting happenstance: Ben and Jess were in San Antonio for a few hours on a Sunday night," Jeremy wrote on he and Jinger's blog.

"Ben called a buddy of his to see if there was anything going on for them to do while in San Antonio for the evening but, providentially, that buddy of his was working," his post continued. "So he suggested to Ben that they go to a church fellowship that was happening at my house and it was there, at that fellowship, that I met Ben and Jess for the first time." Ben and Jeremy hit it off, and they stayed in touch over the next few weeks. About two and a half months after they first met, Jeremy went to Arkansas to visit his new friends Ben and Jessa.

On that first trip, Jeremy and Jinger met, but they didn't express much interest in each other at first. But once Jeremy realized he had feelings for Jinger, he began doing what any smitten person would do — interrogate their mutual friends about it. He wrote:

I called Ben and Jess and began asking them more questions about her—of course, everything they said only confirmed what I had already been seeing: a humble, meek, modest, intelligent young woman with a burning desire to sacrificially serve the Lord in any way she could.

Jeremy and Jinger continued to grow their friendship, and soon after, Jeremy went on a ministry trip to Central America with the Duggar family, where he and Jinger made their feelings for each other clear. Then, in Dec. 11 2015, Jeremy shared his interest in Jinger with her father, Jim Bob.

Six months later, on June 21, 2016, Jinger and Jeremy announced that they were courting. Courting is the Duggar family's term for "dating with a purpose" TODAY reported. The courting rules are strict — couples are not allowed to go on dates without a chaperone, send texts without a parent being in the group chat, or make physical contact beyond "side hugs," according to TODAY.

Jinger and Jeremy first announced their courtship in a video on TLC's website, CBS News reported. A very excited Jinger said in the video:

I met Jeremy last May and then we had the opportunity to go on a mission trip together. It was there that I really saw his heart and admired his character.

Jeremy also expressed his joy in the video. He said:

As opposed to a more casual dating relationship, we really want to honor the Lord, and be very intentional about how we move forward ... We are very excited to begin this journey together, and for you to join us along the way.

And on Counting On, Jinger made it clear that the courtship would turn into an engagement very soon. “I am completely in love,” Jinger said on the show, the International Business Times reported. “We’re thinking fast track is always better."

Their courtship went super fast, even for Duggar standards. Just one month later, on July 26, the couple got engaged, TLC reported. (They got engaged before Counting On episodes chronicling their courtship even aired!) Jeremy proposed to Jinger on a rooftop in New York City. The couple shared footage from their proposal (as well as all their thoughts about the magical night) in a video for TLC's YouTube channel. Jeremy told Jinger that his friend was meeting them up there to take photos, so Jinger had no idea what was coming until Jeremy got down on one knee — despite the string quartet that was playing their favorite song. TBH, it's pretty cute, even though they weren't allowed to kiss.

Just four months later, in November 2016, they tied the knot. And then a little more than a year after that, they announced they were expecting their first baby — bringing things up to today, when said baby is due any day now. It's clear that Jinger and Jeremy are so in love with each other, and it will be so exciting to see them start their family.