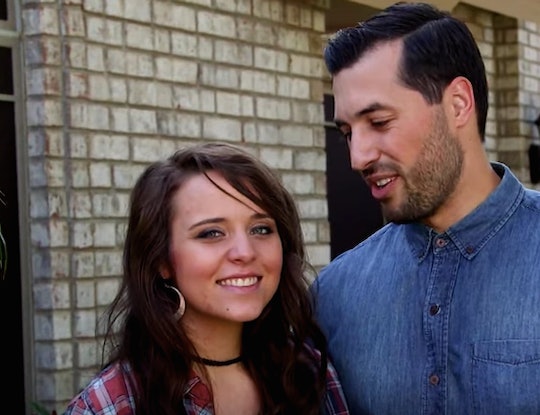 In case you didn't already know, Jinger Duggar is expecting a baby with her husband and has been sharing the experience with her followers on social media. While not nearly as regular as some of us would like, Jinger Duggar's pregnancy updates show how excited she and Jeremy Vuolo are to meet their little one. They have made it clear that they can't wait to grow their family.

Duggar is now about 21 weeks along in her pregnancy and has been taking fans along with her on the journey towards motherhood for the past couple of months. Vuolo shared the most recent photo, which features him and Duggar enjoying some time with their friends. "Jinger and I enjoyed a lovely afternoon in the hills of Los Angeles with @revaustintduncan and his beautiful family," he wrote. "And yes, Dodger is such a good boy."

While Duggar's pregnancy does not take center stage on the post, her belly is featured in the photo so I'm counting it as a pregnancy update. There have only been a few photo updates of her growing belly since the two of them shared the news of their coming baby, so I'll take what I can get.

Duggar and Vuolo announced in January that they were expecting, via an exclusive interview with Us Weekly. In the interview, they shared that as exciting as the first year and two months of their marriage were, they were looking forward to taking this next step, saying:

Following the pregnancy announcement, Duggar's first pregnancy update to social media came at 15 weeks along, when she shared that her little one was the size of an apple.

Just three weeks later, Duggar posted a photo of her growing belly at 18 weeks along, seeming to have transitioned to maternity wear by the time her little one was the size of a bell pepper.

Aside from the baby's size, Duggar and Vuolo still have yet to share any details of her pregnancy — including the baby's sex. But that hasn't stopped fans from speculating about the baby. The blue color of the chalk Duggar used in her 18-week post in particular has led some to believe that the baby is a boy. Others are of the opinion that the baby is a girl because of the shape and size of Duggar's nose. That's right, her nose. An old wives' tale about girls making moms' noses wider prompted that particular fan theory.

Though it's unclear whether they've decided to find out their baby's sex or let it be a surprise, both Duggar and Vuolo discussed what they hope the baby is, and their comments are seriously sweet. In a TLC video from January, they stated that they both had a feeling that the baby was a boy and Jinger was all for it. “I hope that the baby will be like Jeremy,” she said. “He’s just very kind and gracious.”

Vuolo, for his part, hopes just the opposite. In the same video, Vuolo stated with a smile that he would "love to have a little princess," one who is just like his bride:

Duggar's most recent bump-date was posted a little over a week ago, announcing that her little one is now the size of an artichoke. The word "baby" is still written in blue on the chalkboard in the photo, so Team Boy may be on to something. Duggar has been sharing updates every two to three weeks so far, so fans can probably expect a couple more posts before she enters her third trimester. Until then, feel free to spend your time gushing over the past photos. I know I will be.