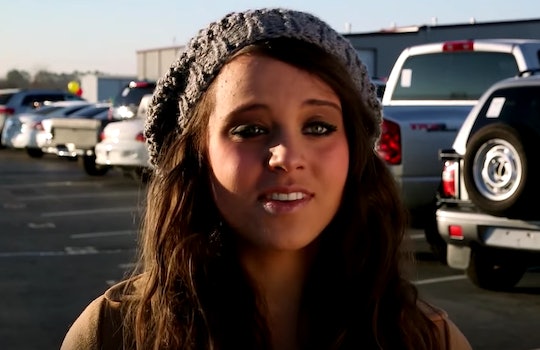 The world was first introduced to the Duggar family back in 2004, with the TV movie 14 Children and Pregnant Again! Since then, viewers can't seem to get enough of this super-sized, ultra-conservative Christian family. Over the years, we've watched more and more Duggars added to the core family, with their TV series ending at the ever-popular 19 Kids & Counting. These days, the Duggar legacy lives on through the TLC spin-off Counting On, which features the adult children as they navigate their way from courtship, to engagement, wedding planning, and starting families of their own. One of the Duggars currently in the spotlight is Jinger, who recently announced she is expecting her first child. And these Jinger Duggar then and now photos will make you nostalgic for 19 Kids & Counting.

If you can't remember the rapid-fire Duggar roll call from the intro to 19 Kids & Counting, Jinger is Michelle and Jim Bob's sixth child and fourth daughter. Although the 24-year-old married former soccer player Jeremy Vuolo in November 2016, and is currently pregnant with their first child, many of us still remember when she was just a spunky, curly-haired little girl. That's because we've pretty much watched Jinger and her siblings grow up on TLC for the past decade. So although this is how fans currently recognize the realty star ...

Long-time fans of the Duggars probably remember when Jinger looked more like this.

Or at the very least, this.

And you you want to delve wayyy back into the Duggar family photo archives, here are a few adorable throwbacks of Jinger that have been posted on social media. Like this one with her big sister, Jessa, (left.)

Or this one of Jinger posing cheesily (while sporting a 90s-esque floral dress) with some of her siblings.

It's funny how, in these early photos, one of Jinger's "trademarks" — her vast array of expressions — is already evident. As her little sister Joy-Anna said in an episode of Jessa & Jill: Counting On, "I definitely think Jinger has the most facial expressions of anybody I've ever met." I think I'd have to second that opinion. See for yourself!

Jessa and Jinger are just too cute to handle.

Also, notice how Jinger (and all her sisters) are wearing dresses in every single photo during their childhood? This has traditionally been among the Duggar "rules" of modesty, along with not showing their legs, not wearing traditional bathing suits, and taking special care not to wear low-cut shirts. After Jinger married Jeremy, however, it seems she has tweaked her definition of modesty, reported In Touch Weekly.

This might have something to do with the fact that Jeremy has given pants the green light. As The Hollywood Gossip reported, the pastor considers pants acceptable modest wear for women. During a sermon, Jeremy reportedly said:

It is your liberty as to whether you dress modestly with a modest pair of pants, or with a skirt, or with a T-shirt, or with a blouse. It is not your liberty, women, to wear sensual, seductive clothing that is designed to draw the attention of your brothers.

In 2016, Jinger left her home state of Arkansas after marrying Jeremy. So far, she's the only Duggar daughter to move away from Tontitown — near Springdale — on a permanent basis. But it seems as if Jinger has been a city girl at heart for quite some time. "Jinger loves things fast-paced," Jessa said in an episode of Jessa & Jill: Counting On. "She likes visiting big cities." This is certainly evident by the Vuolos' Instagram posts.

On Jan. 3, Jinger and Jeremy officially announced they will soon be parents. "Jinger and I have some very exciting news to share with you," Jeremy said to the camera, in their big reveal video. "I'm expecting!" Jinger announced. "It's super exciting. It's just hard to believe that we're at this new stage in life. I think it'll be a boy."

"I am praying that the baby will look like, act like, talk like, and be like Jinger," Jeremy said in the video. "And so, I've asked everyone else to pray as well. I was a little terror as a child, so I'm hoping the little one will be as much like Jinger as possible." How freakin' sweet is that? (Also did you catch this epic facial expression when Jeremy mentioned getting less sleep once the baby arrives? Priceless.)

As someone who has watched Jinger grow up on TLC, I think it's so cool to see her embark on this exciting new stage of life — motherhood! Before we know it, I'm sure there will be plenty of photos of baby Vuolo filling the new parents' Instagram accounts. And I can't wait to see how Jinger continues to grow and change as her family expands.

More Like This
Blake Lively Posted A Bunch Of Pregnancy Photos With A Stern Message To The Paparazzi
Attention, Class! The 'Abbott Elementary' Cast Earned Only Gold Stars At 2022 Emmys
Zaya Wade Is Rocking New Long Hair & As Gabrielle Union Put It, She's A "Vision"
Chrissy Teigen Says Her Pregnancy Cravings Are "Comical At This Point"