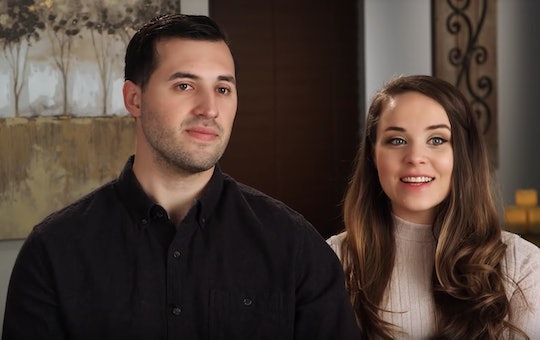 You might think the Duggar family and Kanye West don't have much in common, but as it turns out, their strong faith actually brought them together recently. In fact, Jinger Duggar and her husband went to Kanye West's Sunday Service over the weekend. What's more, Jeremy Vuolo, an ordained pastor, shared his thoughts on the whole experience with his followers on social media.

Jeremy is currently in school at The Master's Seminary in Southern California, where he is pursuing a degree in Pastoral Ministry, according to In Touch Weekly. With this in mind, it makes sense that Jinger and Jeremy ended up at the rapper's Sunday Service held at The Forum in Inglewood, California, on Sunday, Oct. 27. In fact, Jeremy documented his experience with his wife for his followers on his Instagram story.

"We are heading in to Kanye's Sunday Service here at the Forum," he explained in a video. "Looking forward to seeing what it's like. I know there's been a lot of thoughts, a lot of opinions about it, about the new album, about the movie, about the Sunday Service. So looking to seeing it."

Once he was inside of the venue, Jeremy took videos of West and his choir singing worship music. During the Sunday services, he performed gospel music and a pastor shared various bible verses throughout, according to Hype Beast. There are also some major celebrities who've attended these services in the past, according to People, now including Jinger and Jeremy.

In an IGTV video posted later in the day, Jeremy revealed that he had listened to West's new album, Jesus Is King on Friday, saw his IMAX movie Jesus Is King on Saturday, and attended the Sunday Service the following day. His Kanye West-filled weekend ended up giving him a lot of thoughts about his new music and his relationship with God. "Kanye West has been an influence for much wickedness for many years, but he's claiming the Lord has regenerated him," Jeremy told his followers.

"From what I saw this weekend in the album, the film, and the Sunday Service, it seems that Kanye is simply sharing with the world what Jesus Christ has done for him," he added.

West has been open about turning to religion. In an interview with Beats 1 Radio's Zane Lowe, West explained why his new album, Jesus Is King, is a religious album that is strictly devoted to songs about faith and God. Instead of making songs like his more famous hits, "Gold Digger" or "Stronger," his tune has completely changed. "Now that I'm in service to Christ, my job is to spread the gospel, to let people know what Jesus has done for me," West told Lowe, according to Consequence of Sound.

Faith is something the Duggar family and West have in common. Since the start of their TLC reality shows, 19 Kids & Counting and Counting On, the Duggar family has been open about sharing their faith and their strong religious beliefs with their viewers and fans.

The Duggars are certainly used to listening to gospel music, but they might not necessarily have West's former discography memorized. In the early 2000s, Jim Bob and Michelle Duggar explained to BeliefNet about their decision to only listen to religious music. "I used to listen to hard rock music, Michelle did, too," Jim Bob explained. "Then I went to a Christian seminar, actually church camp, and they talked about getting rid of secular rock music. And so, I did that. Then, I went to another conference and they were talking about how music affects people, and especially music that has a beat. It makes you want to dance. But it's not good on your heart and your mind."

Knowing this, it's no surprise that people familiar with the Duggar family might be confused about Jinger and Jeremy's recent interest in West. "I never in a million years would have thought a Duggar would be at a Kanye West event," one Reddit user wrote.

Although the Duggar family and West seem like an unlikely pair, they actually do have a lot in common.