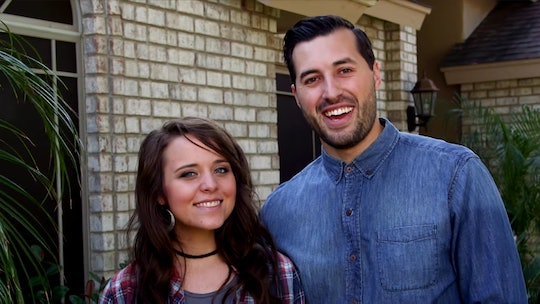 With Joesph and Kendra Duggar welcoming their first child earlier this month, the next Duggar in line to give birth is Jinger Vuolo. Jinger is the sixth-eldest child of 19 Kids & Counting's Michelle and Jim Bob Duggar. She's due sometime in July, which means the final countdown is upon us, folks. As the last few weeks of pregnancy tick down for Jinger, and with the finish line in sight, fans have been speculating about what the first-time mom's plans are going into labor and delivery. If she's anything like her sisters, Jinger Duggar's birth plan could include a home birth.

To start, it's worth noting the adult Duggar children — while currently starring in the hit TLC series Counting On — are relatively private people otherwise. If they haven't already discussed a topic on the show itself, their family websites, or on social media, then chances are no one is going to know much about it. With this in mind, Jinger hasn't actually come out and said, "This is my birth plan." However, she has spoken on the subject of labor and delivery in recent months — and it seems her younger sister's experience has scared her a bit. “I wasn’t super nervous until Joy had her baby and then I thought, ‘Oh my. What if I have a 10-pounder?’” she told Us Weekly in March.

According to Us Weekly, Jinger continued:

That’s probably the only thing that makes me nervous, is just thinking of the size of the baby and going through labor, but at this point, I’m trying not to think about that. I’m trying to just enjoy the pregnancy and I know that when that baby comes I’m going to be super excited to see it.

During this same interview, Jinger also spilled one tiny detail about what she's hoping for when it comes to her own labor and delivery experience: Who she wants present for the big event. “I want my mom definitely at the birth of our child and so I’ve invited her and Jana as well and Jill, she wants to make it," Jinger told Us Weekly. "So they’re invited, but I don’t know how many will be able to make it. My mom, at this point, is the only one who’s probably going to be able to make it for the birth.”

Other than the fact that Jinger wants her mom there by her side as she welcomes her baby girl into the world, not much else is known for sure, at this point. So let's take a look at the adult Duggar daughters' birth plans, shall we? Because so far, they've all had one thing in common: Attempted home births. Jill Dillard and her husband, Derick, currently have two sons, Israel and Samuel. For both of these births, Jill attempted to have home births — and for both of them, things didn't exactly go according to plan, as People reported. That's because Jill actually ended up having C-sections to deliver both of her boys, according to People.

Like Jill, Jessa Seewald had two sons with her husband, Ben: Spurgeon and Henry. Unlike Jill, however, Jessa was able to deliver at home like she had planned. Although with her first son, Spurgeon, she was rushed to the hospital after delivery because she lost so much blood, the Daily Mail reported. The delivery of baby number two did not require a hospital trip.

Joy-Anna Forsyth and her husband, Austin, welcomed their first child — a boy they named Gideon — in February, according to TODAY. Although she labored at home for 20 hours, the news outlet reported, Joy-Anna ultimately required an emergency C-section at a nearby hospital.

So if Jinger is anything like her sisters, she will begin her labor at home with a midwife and a birth team. (And plenty of Counting On fans think so, too, In Touch Weekly reported.) Still, she is known to veer from the "Duggar norm" when it comes to other aspects of her life — like "waiting" for more than a year to start a family, wearing pants and shirts with no sleeves, and moving to a different state. So who knows? She could very well be planning for a hospital birth with her mom and husband by her side. I guess we'll just have to wait and find out the details after baby Vuolo arrives next month!