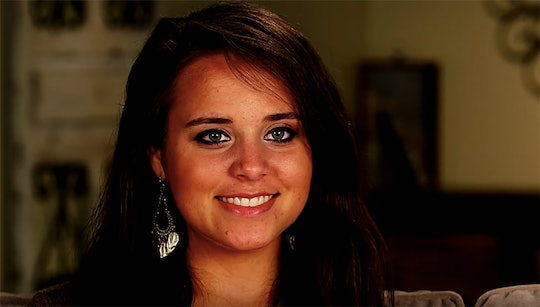 The Duggars are counting on and upward, literally. Want some proof? Look no further than this recent photo of Jinger Duggar's daughter Felicity seemingly floating mid-air against the backdrop of painted angel wings. Posted by Duggar's husband Jeremy Vuolo, the pic shows the toddler enjoying her home of Los Angeles from new heights.

Vuolo, who loves to share snaps of his 1-year-old daughter to Instagram on the regular, took to his account Saturday to show off a new picture of Felicity hanging out in her hometown. "Felicity’s really spreading her wings these days," Vuolo captioned the shot, which shows the baby sporting a beautifully painted pair of angel wings, a mural created by Colette Miller. "They grow up so fast!"

Although the pic is pretty gorgeous, some fans had critical feedback. A few claimed it's photoshopped, while others believed it's just an optical illusion. "Awwww, that levitating milestone is such a big one," one fan joked in the comments. "Mine never flew at that age," another parent commented, while someone else said, "She mastered flying so young."

Others said they were "confused" by the photo, and some even complimented Jeremy on his "photoshop skills."

"How is she on there?" another social media user wondered. "It looks like she’s sitting but I don’t see a ledge or seat... this picture has me scratching my head and loving the brain tease."

However, other eagle-eyed fans suggested that the toddler was, in fact, sitting on a ledge painted to blend in with the bright blue backdrop.

"For all of you who are truly wondering, it is an optical illusion," said an astute commenter. "If you enlarge the picture and look closely, you can see that Felicity is actually sitting on a seat between the wings that is painted to look as though it’s not there."

Either way, the toddler it's true the toddler has been spreading her wings lately. Most recently, Felicity's father posted a photo of her in the pool rocking baby floaties, showing off her swimming skills.

But wait — that's not all. Duggar also posted a photo of the young one riding a wooden horse, along with a caption of Felicity's recent accomplishments. "Seeing Felicity grow and develop new skills is like watching a flower bloom," she said. "It seems like overnight that she’s gone from being fully reliant upon us for everything, to mastering crawling, leaving dad & mom chasing her all over the place! Last night, Felicity conquered her rocking horse, which was no small feat!"

Duggar continued, "Felicity has taken a few solo steps in recent days, but seems to embrace a more cautious approach when it comes to her strides. "

At a young age, the toddler has also accompanied her parents onto the soccer field, where her father Jeremy spends much of his time as a fan and previous professional soccer player.

To catch you up, the toddler is just 1 year old, and was born last year to the couple on July 19. The family of three recently moved out of Laredo, Texas, and relocated to California.

"In recent days, God has made it overwhelmingly clear to us that he is leading us out of Laredo. Through much prayer and counsel, the next step for our family is to relocate to Los Angeles to attend Grace Community Church as Jeremy pursues graduate studies at The Master’s Seminary,” the pair told PEOPLE in March.

They continued, “As excited as we are to begin this new adventure, leaving Laredo this July will be one of the hardest things we’ve ever done; our friends here have become like family. Please pray for us as we open this new chapter of our lives.”

By the looks of it, they are and will continue to do just fine in their new neighborhood... angel wings and all.