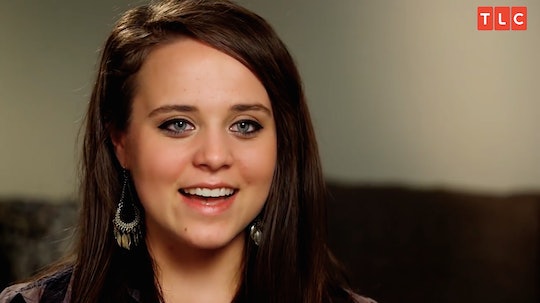 The Duggar family has captured the hearts and peaked the interest of people all over the world. Their openness about their conservative values and their fierce passion for family has led each and every member of the family to develop their own internet following. One of America's favorites is Jinger Duggar, and her Instagram shows what it is that makes her so special. Firmly stationed as the Duggar family's token "rule breaker," according to fans. She wears pants, flaunts her PDA with her hunky husband, and has yet to start a family. All of these aspects of her unique persona are displayed on her Instagram page.

Jinger's Instagram is surprisingly new considering how long she has been in the public eye. The world first met the Duggar family when 17 Kids and Counting aired its first episode on Sep. 29, 2008, according to its IMDb page. Of course, since then mom Michelle Duggar has had two more children and changed the show's name to 19 Kids and Counting before the older children started starring in their own show, Counting On. With almost a decade of life on screen, Jinger's current Instagram page only dates back to May 2 of this year. But since then, she has added a number of photos featuring her husband, her unique fashion choices, and her large family.

Jinger married her husband Jeremy Vuolo on Nov. 5, 2016, according to People, and has shared a slew of sweet snaps since. Along with wedding photos, fans can see the two of them out on date nights, shooting at targets, or sitting by the seaside.

Perhaps most notably, the two just shared a pre-anniversary kiss and Jinger posted it to Instagram. She captioned the above photo:

L is for the way you look at me O is for the only one I see V is very, very extraordinary E is even more than anyone that you adore can.

As sweet and scandal-free as a kiss shared between husband and wife might be, this sort of PDA definitely stands out in a sea of Duggar girl side-hugs.

Along with *shocking* photos of her and Jeremy smooching, Jinger has also posted a few photos of herself rocking trousers and looking comfortable as hell in them. Along with a über-conservative set of values, the Duggar girls also have a very modest wardrobe.

Per Michelle Duggar's rules, the girls are to wear long skirts and dresses until such time as they are married, according to Ranker. Even after they get married, the girls are still expected to ask their husbands' permission before wearing pants. Not only has Jinger gone out numerous times in pants, but she has even been seen wearing shorts. Her Instagram page includes a few shots of her in pants and shorter dresses.

The Duggar's large family is also featured on her Instagram. From throwbacks from her childhood, to professional photos from of the Counting On crew, her posts make it clear that she has big love for the Duggars. Despite her tendency to bend the rules, she is still a Duggar through and through.

One thing that fans won't notice on Jinger's Instagram page are photos of her children — because she doesn't have any. Unlike her married sisters who were quick to start a family, Jinger and Jeremy seem to be taking their time. Her lack of little ones has led people to speculate that she is on birth control or that she doesn't want kids at all, as In Touch Weekly reported in August. Not that it is anyone's business, but Jinger has opened up about her plan to grow her family, according to The Inquisitr. On a recent episode of Counting On, Jinger and Jeremy shared that they have a five-year plan, with Jeremy saying:

I think we’d love to start a family somewhere in that time period, in the next five years, and see what the Lord does.

So — whenever Jinger, Jeremy, and the Lord are ready — fans just might be blessed with some babies photos on Jinger's Instagram. For now, she is sharing more than her fair share of photos. From her home life to life out on the town, Jinger's regular Instagram posts make it possible for even those who don't watch Counting On to keep up with her.