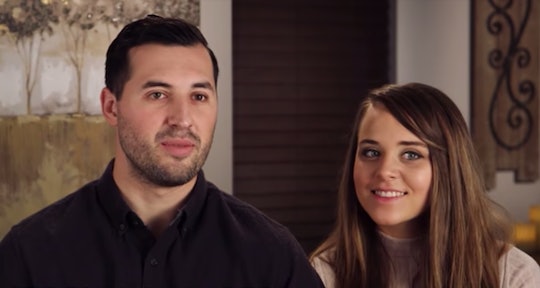 Sooner or later, it happens to all of us: Our social media feeds are gradually dominated by adorable babies and children. Whether it's your own kids or the kiddos of friends and family, it's pretty much inevitable. Which isn't necessarily a bad thing, per se. (I know I can always count on the cuteness overload of babies on Instagram for an instant mood boost.) Well, it appears one Counting On star realized this phenomenon has already happened to her. Because Jinger Duggar's Instagram has been taken over by Felicity — and every parent can relate.

As a refresher, Jinger and husband Jeremy Vuolo welcomed their first child — a daughter they named Felicity — in July, 2018. Which means their little girl is almost 1 year old already. Although the Vuolos have provided their Instagram followers with regular photo updates of Felicity, they have probably noticed a recent increase in post frequency. And the majority of the photos have unsurprisingly included their little. But I mean, with a baby as cute as Felicity, can you really blame them?

On Saturday, June 29, Jinger shared a couple of photos of her daughter sitting in the grass. "Yes, she has overtaken my Instagram 😍," she captioned the post. And it turns out, her Instagram followers are totally here for it. "I don’t think anyone could be upset about it," one Instagram user commented.

Another person wrote, "As she should, mama."

Fellow parents also seem to have the same "problem" as Jinger. One Instagram user chimed in with, "My daughter is 7 , and it’s been 7 years since my Facebook or Instagram has had any photos of anything else! "

Another person commented, "Mine too 🤗 can’t help myself!"

Yet another Instagram user wrote, "And rightfully so. Are you really a mom if you have anything but your kids as your posts 🤣👌🏼💗."

Another person declared, "She is so cute! They usually do overtake our social media!! Love watching your family ❤️"

In case you're wondering, the recent uptick in Felicity photos probably has a lot to do with the Voulos moving to California. Jinger and Jeremy announced in March that they would be relocating from Laredo, Texas, to the golden state, People reported.

“In recent days, God has made it overwhelmingly clear to us that he is leading us out of Laredo. Through much prayer and counsel, the next step for our family is to relocate to Los Angeles to attend Grace Community Church as Jeremy pursues graduate studies at The Master’s Seminary,” they told the publication at the time. They continued:

As excited as we are to begin this new adventure, leaving Laredo this July will be one of the hardest things we’ve ever done; our friends here have become like family. Please pray for us as we open this new chapter of our lives.

On June 22, Jinger revealed her family had already made the big move, according to In Touch Weekly. "Summer in Cali! 🌸," she captioned a photo of Felicity sitting in grass near purple flowers.

Considering their move, it makes sense that photos of Felicity exploring her new home have been dominating Jinger's Instagram account. Then again, even if the Vuolos didn't move across the country, I'm sure their baby girl would still be the star of social media. It's just a fact of parenthood.