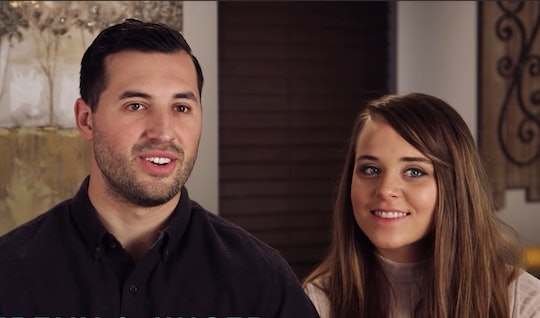 Since Jinger and Jeremy Vuolo welcomed their daughter, the Counting On couple has made it a point to share regular updates with their Instagram followers. Even when the TLC series isn't airing new episodes, fans can still drop in and catch up on her latest milestones, adventures, and everyday moments. (Ah, the power of social media.) To be honest, it's been pretty cool to watch their little girl grow up from afar. And Jinger Duggar's latest Felicity update shows her little one is always on the go.

As Today reported, Jinger and Jeremy welcomed their first child in July 2018 — meaning little Felicity is currently 11 months old. Judging by Jinger's most recent social media update, it appears her daughter is right on track developmentally. On Tuesday, June 25, Jinger took to Instagram to share a sweet photo of Jeremy holding Felicity at what appears to be a cafe. The doting mom captioned her post with, "She’s not a fan of sitting still these days. 😌"

It seems plenty of Jinger's follower have been in the same shoes. One person wrote, "I remember those days with my kids. GO GO GO."

Another fellow parent commented, "I completely understand & feel for you! I have an 18 month old 🙃 the toddler years are exhausting but so much fun!"

Yet another Instagram user chimed in with, "Right there with you mama! My 22 month old hasn’t stopped moving since she was about that age. You can do it!"

Another person declared, "This is an exhausting but fun stage, it does feel like you’re always trying to prevent them from killing themselves."

Meanwhile, Jinger's LA-based followers wondered if the photo was taken at Art’s Deli in Studio City. Which would make sense, considering in March, the Vuolos revealed they would be relocating from Laredo, Texas, to Los Angeles. The reason? Jeremy is heading off to grad school this fall.

“In recent days, God has made it overwhelmingly clear to us that he is leading us out of Laredo. Through much prayer and counsel, the next step for our family is to relocate to Los Angeles to attend Grace Community Church as Jeremy pursues graduate studies at The Master’s Seminary,” the couple told People. They continued:

As excited as we are to begin this new adventure, leaving Laredo this July will be one of the hardest things we’ve ever done; our friends here have become like family. Please pray for us as we open this new chapter of our lives.

Jinger even dyed her normally dark tresses blond ahead of the big move.

According to Jeremy's Instagram account, the Vuolos officially embarked on their journey to California last week — with the Counting On film crew tagging along for the adventure.

And it appears they arrived in California this past weekend.

As Jinger, Jeremy, and Felicity get settled in their new home, I have a feeling fans can expect plenty of new and exciting Instagram posts in the coming weeks. Not to mention Felicity will be turning 1 in less than a month — and then she'll really be taking off soon! Hopefully Jeremy and Jinger have invested in some baby gates because their baby girl will be walking before they know it. And I, for one, can't wait to see how they handle that milestone in the new season of Counting On this fall.