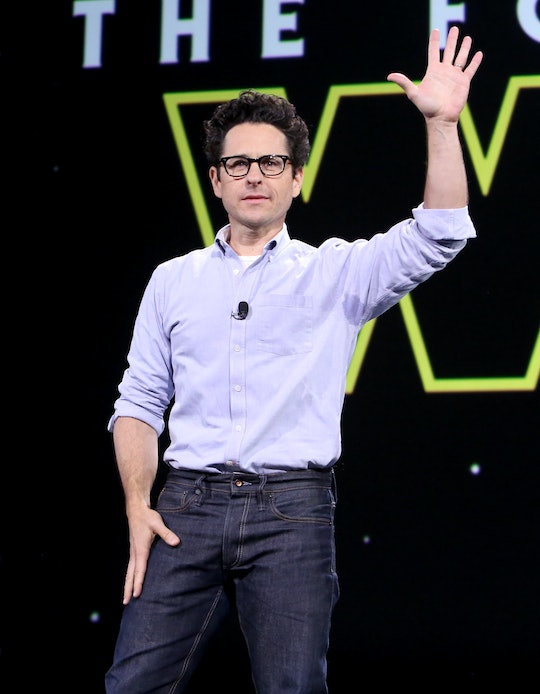 There's a disturbance in the Force. In an interview with Good Morning America Monday, the director of the upcoming and much anticipated Star Wars: The Force Awakens, J.J. Abrams, said he wants to make Star Wars more accessible to women. That sound you hear is every lifelong female Star Wars fan groaning as a dude director overlooks their existence. During the segment, interviewer George Stephanopoulos asked Abrams what part of the Star Wars audience Abrams is most excited to hear from after the movie premieres. Abrams replied:

Star Wars was always a boys' thing and a movie that dads could take their sons to, and though that's still very much the case, I was really hoping this could be a movie that mothers could take their daughters to, as well. So I'm looking forward to kids seeing this movie, seeing themselves in it and seeing that they're capable of doing things that they could never imagine possible.

Romper reached out to Abrams' rep for comment Tuesday but did not hear back immediately.

Some people argue that the Star Wars universe hasn't always been perfectly friendly to women (for example, merchandise is still sold featuring the bikini Princess Leia was forced to wear). It seems like Abrams was expressing a sincere desire to make women feel wholly welcome in the galaxy far, far away. But after the interview, plenty of women jumped on social media to send a clear reminder: female Star Wars fans have been there from the beginning.

At least one Twitter user did commend Abrams' apparent intentions:

Even if Abrams' comment misrepresents the Star Wars fan base, it is exciting to hear that a male director is working to make the sci-fi community a friendlier place for female fans. As one of those fans, I just want it to be known that we've been here all along.