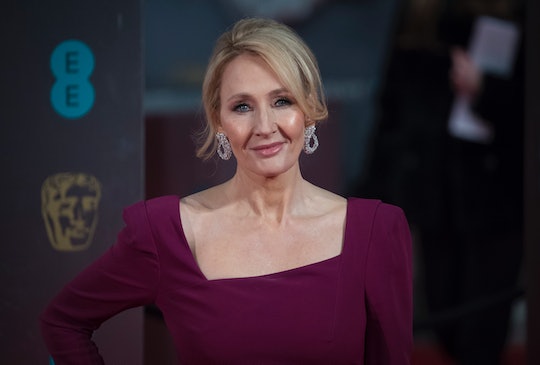 The 19th anniversary of the Battle of Hogwarts is upon us, and so too is Harry Potter author J.K. Rowling's annual tweet to apologize for the carnage. This year, however, her apology riled up fans because it brought up a loss that wasn't just painful in the books, but was made even more painful when the actor who brought the character to life on screen died last year. J.K. Rowling apologized for killing Snape, and fans just aren't OK with it.

Rowling must not have learned her lesson after last year when she took to Twitter on the anniversary of the end of the Second Wizarding War and apologized for killing off Fred Wesley. She's also issued formal apologies over the years for others lost to the battle, including Remus Lupin, Lavender Brown, and Tonks. Her apology for killing off Snape this year, however, dredged up a lot of conflicting memories for fans not only related to the complicated character of Snape himself, but also the beloved actor who played him in the films. Alan Rickman died last year from cancer at the age of 69.

The Battle of Hogwarts was the primary focus of the last installment of the film and was a major part of the narrative of Harry Potter and The Deathly Hallows, when quite literally the entire school of witchcraft and wizardry defends Harry when his arch nemesis, Voldemort (the artist formerly known as He Who Must Not Be Named) demands he be turned over to him and the Death Eaters.

Even though it's been a decade since the final book came out, the culmination of the epic battle, which claimed lives from both sides, was the death of Severus Snape. Snape had been an antagonist of Harry for the majority of the books, but in the end readers learn that Snape's actions were far more complex, and rooted in unrequited love for Harry's mother — and his pledge to protect her son, since he had failed to protect her.

Despite his questionable allegiances, Harry ultimately comes to understand Snape's motives and even admires them. He goes on to name his son after the two men who had been of great importance to him: "One of them was a Slytherin and he was probably the bravest man I ever knew," he says of Snape (the other, of course, was Albus Dumbledore).

Notably, in 2014, Rowling's tweet about having to kill so many beloved characters in one fell swoop garnered a now-famous subtweet from the King of "kill your darlings," Game of Thrones author George R. R. Marin.

Fans took to Twitter as they do every year to respond to Rowling's apology, although there are plenty who still have yet to receive an apology for the character — or characters — they feel were most wronged. Well, there's always the 20th Anniversary next year.

More Like This
12 Of Jack Black’s Best Parenting Quotes
Kristin Bell Shared Some Sweet, Rare Photos Of Her Daughters From A Family Vacation
Chrissy Teigen Is Ready For Her Bump To "Just Be Huge" With This Pregnancy
Adrienne Bailon & Israel Houghton Welcome A Baby Boy Via Surrogate