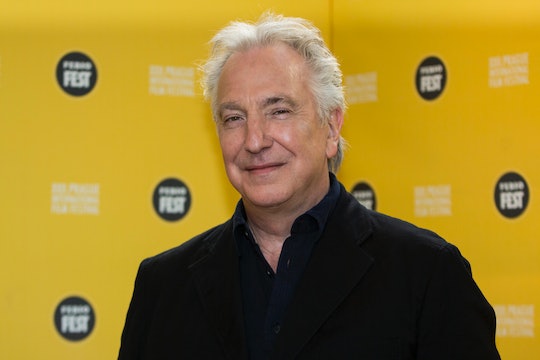 News broke early Thursday morning that Alan Rickman, the actor who played Professor Severus Snape in the Harry Potter movies, had passed away from cancer at the age of 69. Fans are reeling, including one very famous fan: J.K. Rowling, the author of the Harry Potter series. Rowling responded to Rickman's death on Twitter, and her tribute was succinct and touching.

The relationships between Rowling and the Harry Potter stars have always gone beyond the typical writer-actor dynamic, as evidenced by their interaction on social media and beyond. Surely, this is due in part to the fact that the group made eight movies together, but it also shows what a special bunch of people they were. Rowling and all of the actors kept in close touch, letting fans hold on to the magic of the wizarding world long after the movies wrapped.

And indeed, Rickman and Rowling shared a special bond; according to the Huffington Post, he knew more about Harry's story than anyone. Though he claimed not to know the ending in its entirety, Rickman did reveal that Rowling gave him "one little piece of information" that informed the way he played Snape. He never told anyone what it was.

When Rickman filmed his last scene as Snape in 2011, he published a letter in Empire Magazine bidding the franchise farewell, according to BuzzFeed:

I have just returned from the dubbing studio where I spoke into a microphone as Severus Snape for absolutely the last time. On the screen were some flashback shots of Daniel, Emma and Rupert from ten years ago. They were 12. I have also recently returned from New York, and while I was there, I saw Daniel singing and dancing (brilliantly) on Broadway. A lifetime seems to have passed in minutes.

Three children have become adults since a phone call with Jo Rowling, containing one small clue, persuaded me that there was more to Snape than an unchanging costume, and that even though only three of the books were out at that time, she held the entire massive but delicate narrative in the surest of hands.

It is an ancient need to be told stories. But the story needs a great storyteller. Thanks for all of it, Jo.

Eyes are now on Rowling as she grieves along with Rickman's family and friends.

A story does need a great storyteller; it's true. But a character needs a great actor to bring him to life, and nobody could have played Snape as well as Rickman did. Thanks for all of it, Alan.